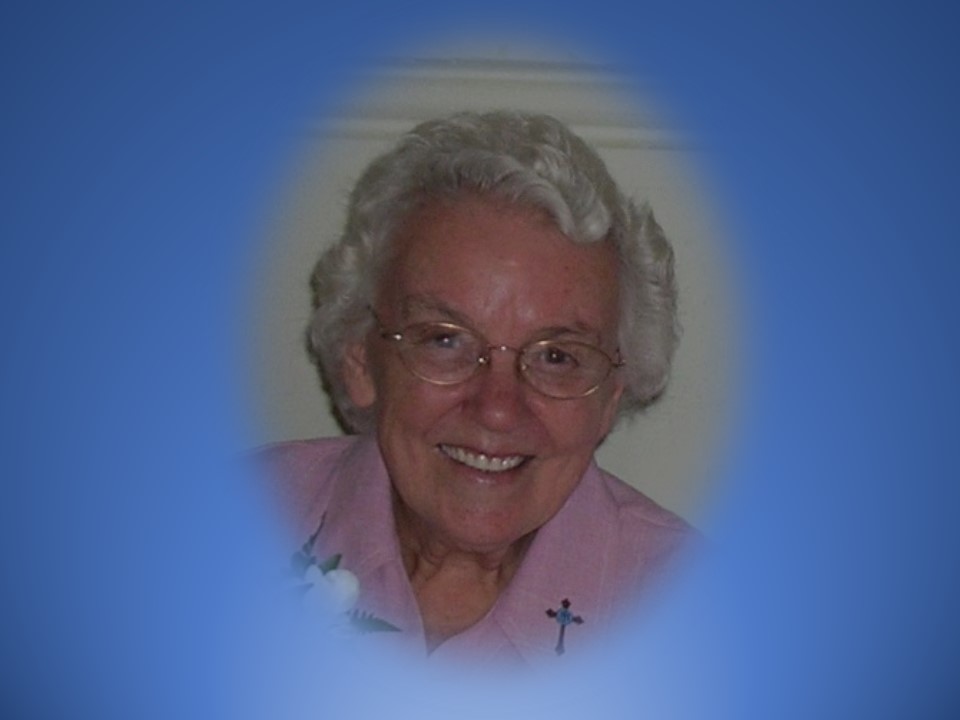 The Ending of a Long Life Well Lived

Put peace into each other's hands and like a treasure hold it;

protect it like a candle flame, with tenderness enfold it.

Reach out in friendship, stay with faith in touch with those around you.

Put peace each other’s hands: the Peace that sought and found you.

How truly did these words, sung during her Funeral Mass capture the spirit and personality of Sister Mary Damian!   Hers was a life lived with gracious good humour as a member of the Harrison family and as a Sister of St Joseph of Lochinvar. She was a woman of great faith who had a desire to spread the Good News of God’s love for all people and who had a great gift for making friends wherever her mission took her.

Sr Damian died at the Martin de Porres Retirement Community at Waratah on the night of 1 March and her funeral Mass took place on Friday, 8 March 2019 when a large congregation of family members, Sisters of St Joseph, former colleagues and friends gathered to pray for her eternal rest and to honour her life of service.  Due to the Convent chapel being unavailable because of a recent fire, the Mass was celebrated in the parish church of St Patrick’s Lochinvar.  On the previous day, a Vigil with the theme of God loves a cheerful giver was held at Martin de Porres to give the residents the opportunity to farewell Damian through prayer and the sharing of memories.

Sr Damian was born Margaret Joan Harrison on 29 March 1926, the fourth child of William John Harrison and Margaret Lowrie.  Her family consisted of Alex, Jack, Dorothy, Allan and Maree. All her siblings except Maree, the youngest, pre-deceased her.  Fortunately, Maree was able to attend the funeral with her husband Ray, together with many nieces, nephews and cousins.  Joan, as she was known in the family, was born and bred in Carrington and it was her great joy to return in her latter years to live among her own people.

On leaving school Joan entered the Novitiate at Lochinvar in 1942, at the age of sixteen and was given the name of Sr Mary Damian.  She was professed as a Sister of St Joseph on 7 July 1944. Most of Sr Damian’s years of active ministry were spent in the schools, as a teacher of Infant and Primary classes and as Principal. She served in many places in the Diocese of Maitland-Newcastle, as well as in the Lismore Diocese at Port Macquarie and in the Sydney Archdiocese for ten years at Clifton Gardens and Summer Hill.

Sr Damian’s ministry went in a new direction in 1990 when she became the Coordinator of the Redemptorist Retreat Centre at the Mayfield Monastery. She followed this the appointment to the Tenison Woods Education Centre as the original coordinator of its residential service.  Sr Damian retired from active ministry and returned to her beloved Carrington in 2002.  She lived out her calling to be a presence in the community there and then in Morisset and Fennel Bay before making her home at St Martin de Porres.

Father Paul O’Neill who presided at the Mass was joined by Father Maurie Cahill.  In his homily Father Paul drew on the scripture texts chosen to reflect the way Sr Damian lived her calling. The first reading from the prophet Micah commanded that we act justly, love tenderly and walk humbly with (our) God.  The second from St Paul to Timothy encouraged us to fight the good fight to the end; to run the race to the finish, to keep the faith.  The Gospel from St John reminded us that Jesus is the vine and that we are the branches that are meant to bear much fruit. Sr Damian did her best to carry out these commissions for nearly ninety-three years of living, seventy-five years of which were as a Sisters of St Joseph.

Sr Mary Damian Harrison was laid to rest in the Sisters’ section of the Lochinvar cemetery.  On leaving the Church the funeral procession moved through a guard of honour formed by students from St Joseph’s College at Lochinvar - a tribute to her ministry of teaching generations of young people for forty-three years.  May she rest in peace.