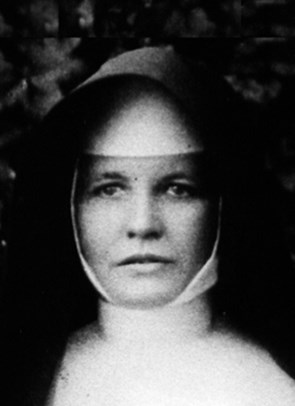 Sister spent most of her life as a religious at Lochinvar, firstly as a teacher in the local school then in administration and formation. A talented musician she was said to have had 'the genius of imbuing her pupils with her own love of Music'.

During her life time she held each of the administrative offices of the Institute, more than once. In 1917 she left the mother house to become local superior at Kurri Kurri, then at Carrington and possibly for a short time at Cardiff. She returned to Lochinvar as Bursar in 1923.

It has been written of her: "She was a successful administrator and educationalist and was largely responsible for the success of the Institute in the Maitland Diocese." Maitland Catholic Sentinel 1936

The following is an extract taken from 1936 Lochinvar Magazine

On the 30th of January of this year one of the strongest links of connection between Lochinvar and its alumnae was broken by the passing of our beloved Mother Mary Hyacinth.

She saw the first convent at Lochinvar, a small cottage develop into the fine buildings which constitute the Mother House, Novitiate and boarding school at Lochinvar and during her fifty years' association with the Sisters of St Joseph was interested in the establishment of twenty branch convents, with 180 Sisters in the diocese and two branch convents at Port Macquarie and Wauchope in the Lismore diocese with eight Sisters; three boarding schools at Lochinvar, Cundletown and Denman; two registered secondary schools, at Lochinvar and Taree; a boarding school for small boys at Aberdeen, and 23 primary schools in the diocese.

The whole period of her association with the Sisters of St. Joseph was spent in Lochinvar Convent where she occupied several important offices, including that of Guardian or Superioress of all Convents of the Institute in the Diocese of Maitland.

Her strength deteriorated over these years and a severe bout of illness necessitated her being admitted to the Infirmary in April, 1935; she remained there as a patient for the remainder of the year. Sister Mary Hyacinth died in the Infirmary at Lochinvar on the 30th of January, 1936 in the presence of the community and her own sister, Sister Mary Vincent.

She was buried in the Lochinvar Cemetery on the 1st of February, and Solemn Office and Requiem Mass were celebrated for her on the 4th of February, 1936.