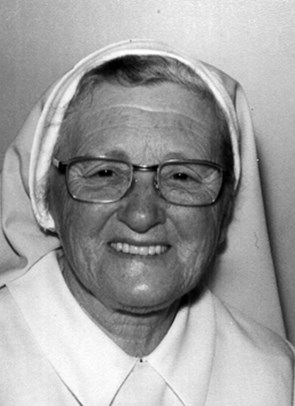 The Connolly family, one of the well known pioneer families of the Lochinvar area, will always be remembered by the Sisters of St Joseph for the great support given to them in the early, difficult days of the Lochinvar Foundation in 1883.   Besides supplies of fruit and vegetables to supplement the Sisters’ meagre diet, Mrs Connolly and her children were available to transport the Sisters by buggy when needed.

It was into this family that Agnes Josephine was born in Greta while World War 1 was still in progress on 22 November 1917, the fifth child of Patrick William Connolly and Ella Regan.  Her brothers and sisters were Eva, Catherine, Veronica, Patrick, Peter, Michael, Anthony, Florence and Clare.  The years after the War were the hard times of the Great Depression when many mines closed and work was difficult to find.

Agnes was educated at St Mary's School in Greta by the Sisters of Mercy and completed her schooling in 1932. It was about this time that the family moved to East Maitland and Agnes helped with the domestic work in the Connolly household before answering the call to the Religious Life.  She entered the Novitiate at Lochinvar on 8 December, 1933 and was given the name of Sister Mary Aiden. She was professed as a Sister of St Joseph on 5 January, 1937 and took her Final Vows on 1 January, 1943.

Reclaiming her baptismal name after the reforms of Vatican 11, Sr Agnes is remembered as a woman of great faith: faithful to daily prayer, she remembered her family, friends and her Congregation. She loved to pray daily in the Chapel until it was no longer possible for her to do so. She found God in the beauty of creation, having a great love of nature especially flowers and the garden. She loved things that were beautiful and showed interest in painting, embroidery, sewing, crochet and photography. Some of these hobbies continued to give her joy in her retirement years.

Agnes was sent to many of the Josephite Convents, especially to those where there were boarders at Lochinvar, Port Macquarie, Aberdeen, Wauchope, Cundletown, Taree and Denman; and also at Kurri Kurri, Krambach and Muswellbrook.   The great generosity of the Connolly family was reflected in her life in many ways.  While much of her time was spent in the kitchen preparing meals for the Community and the boarders and being engaged in domestic duties, she took time to gain her driver's licence and was ever ready to oblige non-drivers in her Community, visiting sick friends and doing the shopping.

Agnes had an exceptional love of her family. She kept in touch with family members and her many friends. She was interested in them all. Agnes has been described and remembered by one of her companions "as an accomplished cook, a good needlework woman, ready to assist others whenever the opportunity arose".

During her sixty-seven years as a Sister of St Joseph, Agnes gave her all to her family, to her Congregation and to her God. When the final call came on 11 March 2003 Agnes was indeed ready to say her final “Yes”.  After the celebration of her Funeral Mass she was buried in the Sisters’ section of the Lochinvar cemetery.