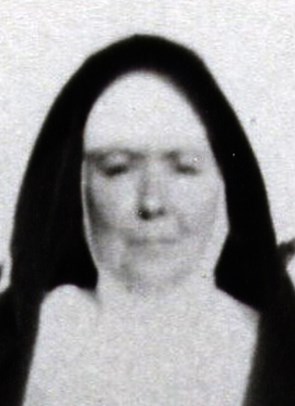 Bridget Daly who was born on 4 February 1876 at Rathmore, County Meath, Ireland was the daughter of Michael Daly and Catherine Monaghan. Bridget was one of three young Irish women who came to Australia to join the Sisters of St Joseph as postulants in the diocese of Ballarat in Victoria. They were taken to Creswick arriving there on 26 October 1900. Bridget was given the name of Sister Alphonsus Mary and made her first Profession on 25 October 1902. She lived and taught in Creswick.

Due to a number of factors including much ill health among the Sisters, unreliable financial resources and a declining population with the end of the gold rush, the Sisters made the decision to leave Victoria. With the approval of the Bishop of Ballarat the Sisters wrote to the Sister Guardian of the Sisters of St Joseph of Lochinvar in the Maitland Diocese in June 1914 for membership of the congregation. The Sister Guardian, Mother Mary Evangelist agreed to their request.

So on 23 December 1914 Mother Mary Evangelist welcomed the seven Sisters of St Joseph from the parishes of Creswick and Dunolly to the Lochinvar congregation from the Ballarat Diocese. Sister Alphonsus Mary Daly, one of the seven, made her perpetual vows in the Lochinvar congregation on 19 January 1915. She was thirty-five when she began her apostolate in the schools of the Maitland Diocese. She was stationed at Lochinvar, Cessnock at Mt St Joseph, Aberdeen, Merewether and again in Cessnock at St Patrick’s. In all she spent twenty-four years in Cessnock. During those years she was the Superior of the community as well as principal of those large primary schools.

In 1952 Sister Alphonsus Mary celebrated the golden jubilee of her religious profession and received countless expressions of affection and gratitude from her religious Sisters, pupils and friends. The next year, she became seriously ill in Cessnock and after time spent in Sydney for specialist treatment she returned to Lochinvar, and passed away peacefully on 9 September 1953.

“In St. Joseph's Convent Chapel, Lochinvar on 10 September Solemn Office and Requiem were celebrated for the repose of the soul of Sister Alphonsus Mary Daly. His Lordship, Most Rev. E. Gleeson, CSsR, D.D., Bishop of Maitland, presided in the sanctuary and a choir of twenty-two priests chanted the music proper for the occasion. Celebrant, deacon and sub-deacon of the Mass were the Rev. Fathers Purcell and Fenton of Cessnock (in which parish Sister had laboured for many years) and Rev. Fr. J. Hughes of Maitland. The Rev. N. Withnell (from St. John's Pro-Cathedral, Maitland) was Master of Ceremonies, and the Revs. G. P. Flatley and Doran were cantors. His Lordship the Bishop, assisted by Rev. Fathers Withnell, Hughes and Fenton, officiated at the bier and at the graveside in St. Patrick's Cemetery.” (From the Maitland Catholic Sentinel)