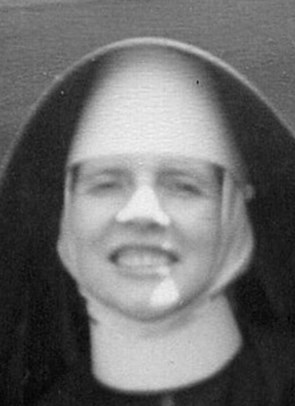 Sister Mary Pierre McLoughlin was born in Scone, one of eleven children of Pierce John McLoughlin and Susanna Simpson.  Her twin sister, Ena was still living at the time of Sister Pierre's death.

Baptised Anna Simpson McLoughlin, she rode a horse to Ellerston School as a young girl for her primary schooling. Her secondary education was at St Joseph’s Boarding School at Lochinvar where she followed her sister, Elizabeth who had become Sister Marie de Lourdes in the congregation at Lochinvar. Anna passed the Intermediate Certificate Examination and on 8 December 1937 entered the Novitiate at Lochinvar taking the name of Sister Mary Pierre of the Holy Face and was professed on 2 July 1940.

After Profession, Sister Mary Pierre taught for a short while at Lochinvar, Cessnock and Merriwa but had to retire from teaching in 1947 due to sickness.  Sister suffered illness for twenty- six of her thirty-six years in the congregation.  Her life was one of intense suffering. She was only very young when arthritis crippled her limbs and she was confined to a wheelchair. She then experienced mental illness which was a deep source of suffering to her.  In 1950 she lost her own sister, Marie de Lourdes who was in the prime of her life. In fact, four of her siblings predeceased her.

Sister Mary Pierre's life was that of a hidden sufferer but her death at Lochinvar on 10 September, 1973 was remarkably free from anxiety.  One of the Sisters who was present when Sister was dying heard her say, "I have spent nearly all my life in the Church suffering, but tonight I will share in the Church triumphant.  Her last words were. Thy will be done.  Thy will be done."

Sister Mary Pierre McLoughlin’s Requiem took place in the Convent Chapel and she was buried in the Sisters' section of the Lochinvar Cemetery.