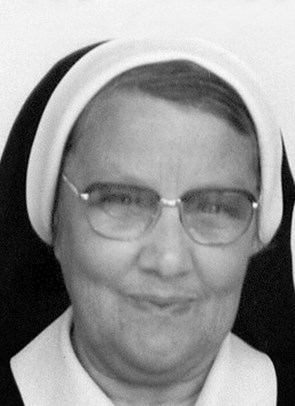 Anne Isabel O’Brien was born in Beechwood near Wauchope on 27 April 19l7, the sixth child of Herbert O’Brien and Catherine Steele.  The family of seven girls and three boys had a dairy farm at Pappinbarra in the Hastings district.

Annie O’Brien entered the novitiate at Lochinvar on 28 December 1933 and was given the name Sr Mary Declan of the Holy Family.  In the following year she was joined by her older sister, Edna (Sr M Beatrice).  Sr Mary Declan was professed on 1 July 1936.

Following her profession Sr Declan remained at Lochinvar for the next twelve and a half years. In her own words, her apostolate consisted of “domestic work in every sphere” including work in the poultry farm, kitchen, laundry, infirmary and with the boarding students. In 1946 she went to Denman for six months.  After major surgery she was appointed to Aberdeen to recuperate for three months and remained for five years. During that time she looked after the junior boys who boarded there with much compassion and kindness.  In all she spent seventeen years of her life at Aberdeen.

Sr Mary Declan was a much-loved member of the Congregation and during her active years worked very hard, caring for boarders and large communities of Sisters in Lochinvar, Aberdeen, Denman and Merewether. For over thirty years she suffered a great deal of ill-health but was always an inspiration to those who knew her for her cheerfulness, her courage and patient endurance of suffering, her generosity and spirit of gratitude.  Her bright, laughing eyes and her warm her warm welcoming smile were her special gifts.  She really lived out the words of St Paul, “I want you to be joyful, always joyful in the Lord”.

In 1987 Sr Mary Declan became a member of the community at Lochinvar. In 2005 she suffered a stroke and was admitted to St Joseph’s Home at Sandgate and later to the Mercy Nursing Home at Singleton where she suffered a second stroke and died peacefully in the Singleton Hospital on 3 June, 2005, the feast of the Sacred Heart.  She was in her eighty-eighth year and the sixty-eighth year of her religious profession. Her Funeral Mass was celebrated in the Chapel at Lochinvar on 7 June and she was buried in the Sisters’ section of the Lochinvar Cemetery.