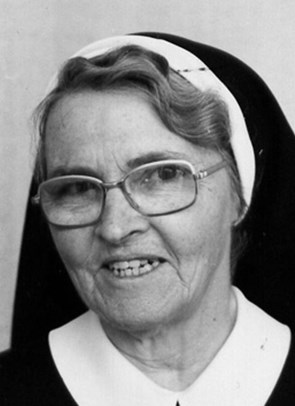 Valerie Alice Hatton, the daughter of Robert John Hatton and Hilda Simmons was born on 20 September, 1911 at Stanford Merthyr.  Valerie was one of a big family of eight children who lived on the Kurri-Cessnock coalfields where the close-knit community faced together the rigours of the depression years.

Valerie entered the congregation of the Sisters of St Joseph at Lochinvar on 6 January 1930 and was given the name of Sister Anne Mary of the Divine Child. Her older sister, Veronica joined her in the Novitiate six month later and became known as Sisters Mary Vianney.

After her profession as a Sister of St Joseph on 6 July 1932, Sister Anne Mary began her ministry throughout the diocese of Maitland-Newcastle.  From 1933 to 1988 she taught infant, lower primary and upper primary classes as well as teaching music in Taree, Carrington, Merriwa, Merewether, Dungog, Cardiff, Summer Hill, Belmont, Edgeworth, Clifton Gardens, Swansea, Denman, Kurri Kurri, Morisset, Bulahdelah, Cessnock and Lochinvar.  Having been employed as a tailoress for three years before entering the congregation, she also guided children in the art of sewing.

Sister Anne Mary loved children. She was kind and encouraging, especially to any child with learning difficulties. She helped parents with her day by day visitation after school, her understanding of their problems and her support with food and clothing when their needs were great.

She was a member of the first community in Summer Hill in Sydney. As there was no residence, the Sisters accepted the hospitality of the Sisters of Charity at Lewisham and stayed with them till a couple of rooms were prepared above the sanctuary of the church. This dwelling was approached by an outside staircase and was rather primitive.

At Edgeworth, Sister was again in a pioneering community. There she and Sister Cabrini taught in the old army huts brought from the Greta Migrant Camp. The huts were extremely hot in summer and cold in winter, when the frost lay for hours on the roof before it thawed. In Edgeworth, as at Summer Hill, there was nowhere for the Sisters to live. For some time they lived with the Sisters at West Wallsend, travelling daily by bus to Edgeworth and 'hitching' a ride home in the afternoon. Eventually another army hut was purchased for use as a convent. Sister Anne Mary was both superior and principal and took the children from Year 3 to Year 6 as the school grew. In both these pioneering communities Sister worked hard, joining the people in many tasks, including scrubbing the church. She was loved by the people, who still speak of her.

In I991 Sister Anne Mary returned to live in Lochinvar. During the last six years of her life suffered much illness. She was a very prayerful person.  A special feature of Sister's prayer was her love for the crucifix which she held tightly in her hand in bed each night. She had it firmly in her hand while being taken by ambulance to hospital. She held it till the night of her death which came in the Maitland Hospital on 25 July, the eve of the feast of St Anne.  After her Funeral Mass in the Convent chapel she was laid to rest in the Sisters’ section of the Lochinvar cemetery.