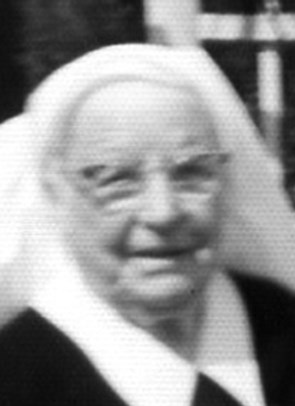 Anne Moy was born at Warkworth on 25 September, 1887 to Michael Moy and Anne Hickey. Michael was born at Raymond Terrace and was a teacher, at one time being stationed at the Lochinvar School. Her mother, Annie was the youngest child in the Hickey Family and was left an orphan at the age of twelve. Annie's home was where the Anglican Trinity Church now stands at Lochinvar. At the time there was no church at Lochinvar and Mass was said in the Hickey's home. Dean Lynch was one of the priests who visited Lochinvar from Maitland. Michael Moy and Annie Hickey had ten children with five boys and five girls making up the family. Two died in infancy. Mary Moy, her sister became Sister Mary Ligouri in the Sisters of St Joseph at Lochinvar and was professed in 1899.

After completing her education, Anne entered St Joseph's Novitiate on 8 December 1904, was given the name of Sister Mary Ita and was professed on 8 January 1908. Sister began teaching in the branch houses in 1909 and taught lower primary and infant classes in Lochinvar, Dungog, Glendonbrook, Carrington, Wingen, Wybong, Merriwa, Cessnock (St Patrick’s), Gloucester, Abermain, Largs, Taree, Kendall, Swansea and Gresford.  Sister also taught music and, besides individual lessons she used her musical talent very effectively with her Infant classes. Music was a source of great happiness to her over the years.

Sister Mary Ita had a keen sense of humour and the community recreation often rang out with laughter. She was of small stature but held herself with great dignity before the children and the Sisters. Sister suffered a stroke in St Joseph’s Infirmary and her death occurred on 9th August, 1976 after many fruitful years of service. Her Requiem was held in the Convent Chapel and the burial took place in the Sisters' section of the Lochinvar Cemetery.