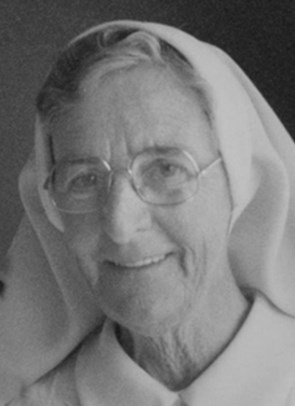 On finishing school, Carmel worked as a shop assistant and a dental nurse, before taking the Nurses Entrance Exam, doing her general nursing training at the Maitland Hospital from 1938 to 1942. She then moved to the Crown Street Women’s Hospital for her obstetric training and gained her Obstetric Nurse’s Certiﬁcate in 1944.

Armed with both Certiﬁcates and much experience, Carmel Mary then moved to Batlow and became the Bush Nurse for the area until her entry into the Novitiate at Lochinvar in 1945, following in the steps of Maureen, her younger sister.  Carmel Mary, then known as Sr Mary de Lellis of the Blessed Trinity was professed as a Sister of St Joseph on 6 January 1948. Her first appointment was to the infirmary at Lochinvar where she spent the first ten years of her religious life.

The following years were spent in the classroom with Sister Camel Mary teaching firstly, Infants at the Greta Migrant Camp in 1957 and then upper primary classes in a number of places: Aberdeen, Shortland, Charlestown, Belmont, Cessnock and at Port Macquarie. She was a woman of indomitable spirit with much ‘get-up-and-go’ as well as being a great conversationalist.

In 1967 Carmel Mary was recalled to Lochinvar to be in charge of the newly built Nursing Home. With great assistance given by her Sisters Sabina, Gemma and Antonia she cared for the aged and sick Sisters with great dedication till 1978. Following these long and often difficult years, Sister Carmel Mary returned to teaching for a short time, then did some pastoral work in various parishes before again taking on the care of some sick Sisters at Shortland from I983 to 1987.

In all, Carmel Mary spent twenty-eight years caring for sick Sisters.  On retiring from that role she ministered as a parish and community support person until going to the Holy Family Wing in 2001 and then to St Martin de Porres Hostel at Waratah where she had had an active pastoral role in supporting her fellow residents. She wrote very little about her life and ministries but one note gives an insight into the spirit in which she lived her life: “I would like my whole life to be an offering of gratitude to God, through Mary, for his wonderful goodness to me.”

Sister Carmel Mary died peacefully on 8 July 2005 at the Mater Hospital Waratah aged 85 years and in the 57th year of her religious profession. After the celebration of her Funeral Mass Sister Carmel Mary was laid to rest in the Sisters’ section of the Lochinvar cemetery.