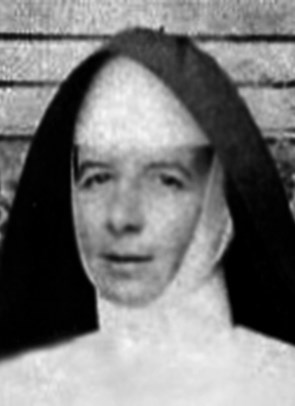 Catherine Williams was the daughter of Michael and Brigid Williams (née Maher) of Camden Haven at the northern end of the diocese. One of a family of twelve, she was born 2 January, 1872, eleven years before the Sisters of St. Joseph made their foundation at Lochinvar.

Catherine and her sister, Mary (Sister Mary Raphael) entered at Lochinvar on 3rd October 1892 and they were professed on 10 June 1895 with Sr Paul Burke. Catherine was given the name of Sister Mary Berchmans.

She served in in Wingen, Cessnock (Mt St Joseph’s), Abermain, Cessnock (St Patrick’s), Gloucester, Cardiff and Brookfield.  She lived a long and useful life of sixty-four years in the Congregation ministering in the education of the children of the diocese.

Although she had been invalided some years on account of a broken hip, Sr Berchmans was well otherwise and was in good spirits. Death then was not expected when she became suddenly ill with a seizure, she was anointed, received all the rites of the Church and died peacefully and calmly on 9 October 1956. She had been a good and faithful servant.

The Solemn Office and Requiem Mass took place in the Convent Chapel at 10.30 a.m. Thursday 11 October 1956. In the absence of His Lordship Dr. Toohey, Rt. Rev. Mon. Peters presided and officiated at the graveside.

Celebrant of the Mass was Rev. Father Lewendowski with Rev. Fathers Fenton and Brennan deacon and sub-deacon and Rev. Father Delaney Master of Ceremonies. Cantors were Rev. Fathers Coffey and Hughes. Messrs. J. and F. Anderson (brother-in-law and nephew of the deceased Sister) and Messrs. Killan and McFayden were pall bearers.