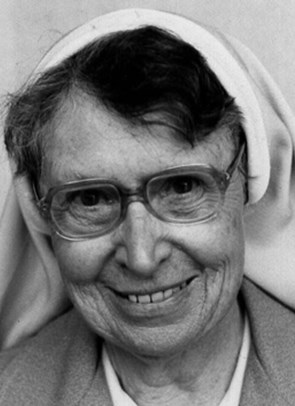 Sister Cecelia Mary Collins was born on 18 April, 1913 at Greta NSW.  Her parents were James Collins and Mary Rose Scully. Her family consisted of Leo, Joseph, Francis, John, Vincent who was killed in action in R.A.A.F in 1943, aged 23 and Cecelia, the only girl. Both her maternal grandparents emigrated from Adare, Co. Cork, Ireland. As her father was a station master the family lived in many places. It was from The Rock in southern NSW that Cecelia left home at the age of nine and came to board at Lochinvar. After leaving school she worked in the office of the local store at The Rock.

Cecelia entered the Novitiate at Lochinvar on 2 February 1931 and was given the name Sister Mary Finbarr. She was professed on 5 July 1933 and a few days later went on her first mission to Aberdeen to teach the 1st and 2nd classes. Other appointments followed at Kurri Kurri and Merewether where she began her secondary schools teaching to be followed by Lochinvar and Taree.

After eight years in the demanding roles of teacher and Boarder Mistress Sister Mary Finbarr was asked in 1949 to take on the very responsible position of Mistress of Novices during those post-war years when large numbers of young women were entering religious life. She remained in the role until 1961when she was appointed to be superior of the community in Taree.

Another change of ministry came in 1967 Sister Mary Finbarr  was asked to go to Lyneham, a suburb of Canberra, as Mistress of Formation for the student Sisters resident in the House of Studies - some to attend the Teachers College at Signadou and others the ANU. Responding to a request from Bishop Toohey in 1971, for Sisters to live and work in the Catholic Church Office at "The Hill" in Newcastle, Mother Mary Cletus appointed Sister Mary Albertus and Sister Cecelia who did the secretarial work in the diocesan church office. In her retirement years Sister Cecelia lived in Tuncurry, Lochinvar, Mt Carmel Village Maitland and finally St Joseph’s Home at Sandgate.

Being an instrument in God’s hands meant Cecelia had no personal pride in her achievements, only hope that she would do everything to the best of her ability. She was always grateful for support, for a word of appreciation, always hoping she was not putting people to any trouble, always ready to affirm. She was aware of others, looking out with a warm smile of recognition. She was faithful to her friends, to letter-writing, to keeping in touch with her loved family, with women who left religious life, with priests and with anyone in need.

Sister Cecelia died peacefully, after suffering months of illness on 23 May 2005 aged ninety-two years and was buried in the Sisters’ section of the Lochinvar cemetery.

Excerpts taken from the Words of Remembrance delivered at her Funeral Mass.