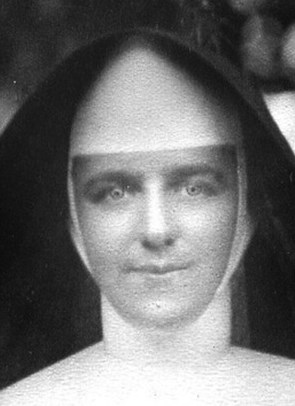 Cecilia Ruelle, the daughter of Leo Ruelle and Mary O'Connell was born in Melbourne in 1893. She came to Lochinvar so that she might love God through keeping the rule of the Sisters of St Joseph. As a young girl of great promise and beauty, she came to the Novitiate at Lochinvar in 1909 where she was given the name of Sister Mary Brendan. Unlike her patron, she made no extra ordinary journeys but she had a similar quest to St Brendan which was to seek souls for Christ.

Sister Mary Brendan held the office of superior of the convent and principal of the school in many places in the diocese and beyond: in Wingham, Denman, Dungog, West Wallsend, Kurri Kurri, Kendall and Lochinvar. Her life was given over totally to the missionary ideal. Those educated by her and many around the diocese remembered her for the good example she set.

Her active life changed in 1952 when ill health caused her to leave the apostolate of the classroom. She returned to Lochinvar for the care that was available at the Infirmary. The last twelve years of her life were not wasted nor was she alone as she embraced the apostolate of prayer within her community of Sisters who lavished affection and care on her.

Sister Mary Brendan Ruelle died on 11 March, 1966 aged seventy-three after an illness of twelve years borne with heroic fortitude and patience. The Solemn Office and Requiem took place in St Joseph's Convent Chapel on 14 March. His Lordship Most Reverend John Toohey presided in the sanctuary and preached the panegyric. A choir of twenty-nine priests chanted the Office for the Dead. The celebrant of the Mass was Reverend Father Driscoll and Reverend Father Newton and Reverend Father McDonnell were Deacon and Sub-Deacon respec­tively. Reverend Father T. B. McCosker was Master of Ceremonies. The Cantors were Reverend Fathers Flatley and Delaney.

The interment took place in the Lochinvar Cemetery immediately after the Mass, with the Bishop and clergy leading the cortege and the Sisters, relatives, friends and students following the remains.