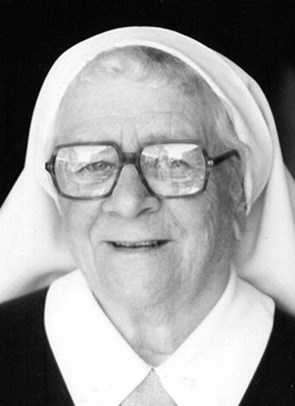 Sister Mary Cecily was born Clare Hyacinth Keys on the 16 March 1905 in Tamworth. She was the second daughter of John Keys and Agnes Leppan.

Sister Mary Cecily entered the Novitiate of the Sisters of St Joseph at Lochinvar on the 2 July, 1924 and was professed on 6 January, 1927. Sister taught at Taree, Merewether and Lochinvar, was appointed superior of the first community at Shortland and later to the new foundation at Parkside, in north Queensland. She then returned to Taree and after four years entered into a rich and very happy retirement at Charlestown Convent.

Possessing a deep faith, she was a woman of integrity with a remarkable enthusiasm for the gift of life and for learning. Her talents were many and she was very generous in sharing her giftedness.  As a boarder at Lochinvar she is remembered as a fine violinist procuring honours in all her exams and was the only student ever, to gain 100 marks in an examination.

To describe her as a brilliant teacher is an understatement. She had a remarkable talent for imparting knowledge and drawing forth hidden talents in others.  Her love of the arts and her energy in promoting them was boundless. It was very difficult to be indifferent in her presence, and consequently one felt nearly compelled to work with the same energetic approach, as she herself used when approaching every task.

Her choirs were noted for their artistry and fine musicianship. A gifted accompanist, many of her pupils were numbered among the state's finest musicians. She handed down a wonderful tradition of music, both sacred and secular to her Sisters and pupils. With her predecessors, Sisters Angela and Ursula she was one of the "greats" in the musical world.

Sr Cecily had a very warm affection for her family and followed the careers of her nieces and nephews with much interest. An inscription on a card written by Sr Cecily says much about the way she lived her life: “Live for today, dream for tomorrow and learn from yesterday!”

Sr Mary Cecily died, very peacefully in her sleep at Charlestown Convent on 5 May 1989.