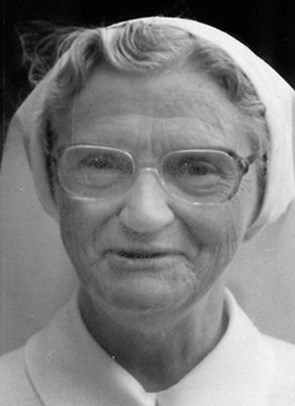 Born on the 17 July, 1919, Dorothy Casey was the second youngest of the seven children of Michael Casey and Mary O’Brien, both of strong Irish stock, the Caseys being from County Clare. They raised their children in the Catholic tradition, full of homespun wisdom and warm family love. Dorrie, as she came to be known was baptised Dorothy Imelda in St James Church Muswellbrook one week after she was born and joined the family home at Kayuga with her siblings Agnes, Ned, Mollie, Ray and Clare. Young Jack completed the Casey household a few years later.

Happy childhood years stretched before them interspersed with the daily chores attendant on running the dairy farm through the post-war and depression years. Life at Kayuga revolved round the school, the dance hall, cricket pitch, tennis court and post office. Domestic skills were learnt at home from her mother, with cooking lessons looming large in Dorrie’s memories. Her mother taught the children their catechism. Each Sunday the outing to Mass in Muswellbrook in the horse and sulky with Ned and Ray on riding alongside, was a measure of the strong faith that sustained the family. Social evenings often saw a gathering of friends to play cards and join in community singing.

In 1930 the sudden and unexpected death of Dorrie’s father when she was only eleven, necessitated the rearranging of the household. Ned had to come home from College to run the farm while the girls continued their schooling at Lochinvar where her eldest sister, Agnes had joined the Novitiate as Sister Mary Mildred.  Seven years later, in 1937 Dorrie followed in her footsteps on the Feast of Christ the King becoming Sister Mary Kilian. She was professed on 2nd July 1940.

The years were filled teaching infants and primary children in a number of parish schools. Her first appointment was to Cardiff.  Her recollection of those four years was dominated by the disaster of having the school burnt to the ground. In her teaching apostolate, Dorrie moved the length and breadth of the Diocese and beyond: to The Junction, Shortland, Swansea, Merewether Beach, Windale, Morisset, Kurri Kurri and Toronto. She was chosen to be a founding member of the Bulahdelah, Summer Hill and Gateshead communities.  One of her companions spoke of her as a “gentle, patient and encouraging person, who treated each child as an individual. Dorrie had a special gift, an ability to awaken and guide the faltering steps of children handicapped in any way. “

Dorrie carried her family closest to her heart. She looked forward to visiting the family home at Kyuga and as the years passed she saw the death of each one of her brothers and sisters. Each one was loved with great tenderness but it was the sudden loss of her own sister, Sister Mary Mildred that she felt most keenly.  Just as hearing loss curtailed her teaching so deteriorating eyesight necessitated her move to the Holy Family Wing at Lochinvar and ultimately to the Calvary Retirement village at Cessnock.

It was in Cessnock that Sister Dorothy “Dorrie” Casey died on 3 July 2012 just days before her ninety-third birthday.  After the celebration of her Funeral Mass in St Joseph’s Convent Chapel she was laid to rest in the Sisters’ section of the Lochinvar cemetery.