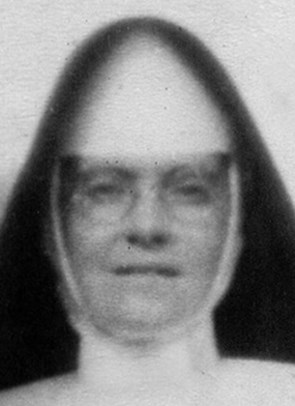 Born in Scone on 21 August in 1908 to Pierce McLoughlin and Sussana Simpson, Mother Marie de Lourdes, aged forty-two years, had spent the whole of her religious life at Lochinvar.

Baptised Elizabeth Caroline, she came to Lochinvar as a student to prepare for the Leaving Certificate examination; and having completed her course, and feeling that God was calling her to work for Him in the Congregation at Lochinvar, she went on to the University to obtain her degrees and so be the better qualified for the work of teaching. She entered the Novitiate on 11 February 1930, was professed on 6 July 1932 and as soon as her canonical training was over, devoted her life and her brilliant intellectual gifts to the service of her pupils.

In 1943 she was appointed Mistress of Studies for the young religious trainees; and in April, 1949, at the General Chapter was elected Secretary General of the Congregation.

Never robust, Mother Marie de Lourdes suffered all her life from asthma, which was accentuated during the unusual winter seasons of the years before her death. Subsequent upon a severe attack of some weeks' duration, a serious cardiac condition supervened; and in spite of loving care and medical skill and attention, she passed away on Tuesday morning, 19th September 1950, surrounded by her stricken Sisters in religion. Her untimely end was a severe blow, and loss immeasurable.

Many messages of sincere sympathy were received from friends and past pupils. By these latter her name will ever be held in benediction; for she molded their character by patience, kindness and sweetness, and set them on the way of true Christian citizenship by word and example.

Sympathy was extended to her parents, Mr. and Mrs. Pierce McLoughlin, and her brothers and sisters, all of whom attended the solemn obsequies, as well as her other relatives and countless friends.

Four of her sisters were students at Lochinvar, as well as five cousins; and she was predeceased by an aunt, Sister Mary Joseph McLoughlin, who, also a Lochinvar student, was local Superior of Wingham Convent when God called her home.

The Sisters expressed their sincere thanks to their Lordship the Bishops Gleeson and Toohey of Maitland who presided at the solemn obsequies, and to the clergy who attended in such numbers.

Taken from “The Sentinel" of the Maitland Diocese