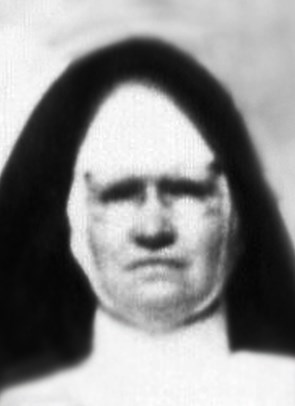 Ellen Jenkins was born in Cooks Hill to Charles Jenkins and Ellen Innes on 26 March, 1890. She entered the convent on 17 April 1910 and took the religious name of Sister Mary Austin of Our Lady of the Sacred Heart. She was professed on 30 January 1913 and ministered in primary schools in Lochinvar, Dungog, West Wallsend, Krambach, Merriwa, Largs, Denman, Port Macquarie, Cessnock, Taree, Kurri Kurri and Cundletown.

In 1940 Sister Mary Austin became sick. During her long illness she suffered intensely, spending much time in hospital where the doctors found it difficult to diagnose her case. Even in her many days of sickness and misunderstanding this good humour and cheerfulness was ever there. She endured a long illness but always cheerfully, a witty sally ever on her lips” (Lochinvar Magazine).

She died in Mater Misericordiae Hospital Waratah on 18 July, 1941 aged fifty-one. Sister was buried on 19 July in the Sisters' part of the Lochinvar Cemetery. Solemn Office and Mass was sung in the Convent Chapel for the repose of her soul on 22 July 1941. Her three sisters and two brothers were present.