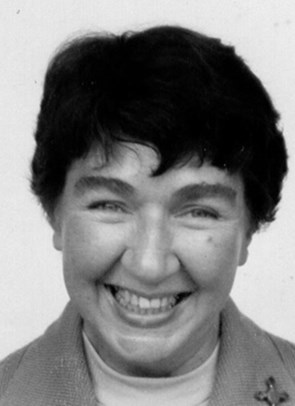 Rita Elsie Krelle was born on 30th May, 1926 to Louis Clairmont Bernhardt Krelle and Ellen Treacy.  One of six children, Elsie grew up in Taralga near Goulburn with her three brothers, Louis, Carl and John and two sisters, Joy and Betty.

Elsie with her sister Betty, came to Lochinvar as a boarder in 1935 when she was nine years old.  Her mother, Ellen had been ill for some time and in fact, both parents died tragically within a year of one another: her mother in 1936 and father in 1937. Elsie had two aunts in the Lochinvar Congregation, Sisters Marcellus and Jerome. So Lochinvar was home for her from childhood days and there she blossomed.

Elsie entered the convent at Lochinvar in 1943, aged sixteen and was professed in 1945 as Sister Mary Augustine of the Infant Jesus with her cousin Pauline, Sr Louise McDonnell and Srs Mary Jackson and Antonia Toomey.  She stayed at Lochinvar for a couple of years teaching music and then began her ministry in a variety of places around the Hunter and Manning regions: Taree, Lochinvar, Bulahdelah, Wingham, Clifton Gardens, Shortland and Cessnock.

A brilliant musician, Elsie opened up for others the magic of music during her individual lessons, her choir work and orchestra playing with children and adults alike. Her own singing voice and music talent were remarkable as evidenced by the music results and the scholarship she won to London.

In 1981, Elsie had study leave and did not return to teaching but began ministry as a Parish Pastoral Associate and served in Belmont, Rutherford and Port Macquarie parishes. Her naturally extrovert personality drew her to people and they to her. Her natural enthusiasm for life, her deep prayerfulness and her great generosity of spirit touched so many lives.

She was amazingly self-giving. In true Josephite style, she never saw a need without doing something about it. Her big heart resounded through her big laugh! She always had time for a chat, and kept in contact with so many through letters and cards - in her beautiful, patrician hand writing!

Elsie befriended and supported the priests with whom she worked. In his letter to parishioners on the occasion of Elsie’s leaving Port Macquarie, in 2011 after fifteen years of service, Father Donnelly wrote of her self-effacing nature and humility and her outstanding example of piety and holiness in the parish and declared the parish poorer for her going.

In July 2011, Elsie moved into Southern Cross Apartments at Caves Beach, at her own request and on her own initiative.  During the last six months, Elsie became increasingly frail and dependent.  In the early hours of Wednesday, February 12, she had a bad fall, was hospitalised in the John Hunter as her condition was extremely critical. The doctors advised surgery. Elsie agreed, knowing something of the risks involved and, as God would have it, she collapsed during the surgery, was placed on life support and never regained consciousness.

She died peacefully on Wednesday, February 19, 2014 and is buried in the Sisters' Cemetery at Lochinvar.