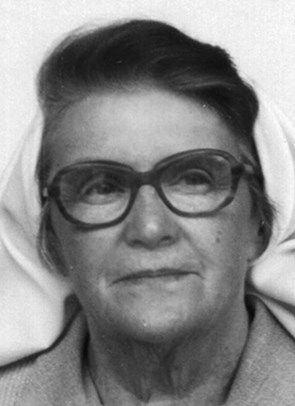 Geraldine Perkins was born in Wingen, NSW on the 18 April, 1910 to Patrick Perkins and Winifred Mullins. Patrick was a grazier in the Upper Hunter. The children of the Perkins family were Uriel (who became Sr Mary Virgilius at Lochinvar), Loretta, Joan, Geraldine, Leo, Kevin and Reg.  Geraldine’s early schooling was at the convent school in Wingen and she did her Intermediate at St Joseph’s College in Lochinvar.

Speaking of her family tree, she liked to recall that the family had been traced from Bernard Keenan, transported to the colony in 1836 and to John Dent and Catherine Lyons transported in 1816 and 1810 respectively, antecedents of her grandmother Eleanor Perkins.  Her Perkins grandfather was a native of Tipperary.

Geraldine had completed sufficient studies to practice as a Teacher’s Aide before coming on 27 June, 1930 to the Novitiate at Lochinvar. After her ﬁrst Profession on 4 January, 1933 Sister Mary Reginald, as she was known in religion, began her apostolate in the Congregation as a Primary School teacher, principal and eventually remedial teacher having completed her teacher training while in the Novitiate.

Sister taught in Merewether, Abermain, Cessnock, Denman, Merriwa, Cardiff, Wauchope, Taree, Krambach, Port Macquarie, Kurri Kurri, Gloucester, Summer Hill, Gateshead and Muswellbrook being appointed to some of these twice and in the case of Taree three times. Not only was she a classroom teacher but she was made a Principal in 1943 at Denman and continued both roles on occasions till 1979. In 1980 Sister took on part-time teaching at Kurri Kurri and in 1981 she retired and did remedial work at Wauchope, Tuncurry and Merewether Beach till 1983.  She was a very creative teacher as well as being a very spiritual person who loved to read her Bible and draw the children's attention to the passages which showed how much God loved them.

Sister Geraldine came home eventually to the Lochinvar Nursing Home and for many years was confined to bed before her death on 21 April 2000. Her sister Uriel (Sister Mary Virgilius) had predeceased her on 30 April, 1996. She had great affection for her sisters and brothers and the nieces and nephews who were very fond of her.  Sister died on 21st April, 2000 aged ninety. Her Requiem Mass was held in the Convent Chapel and attended by her Sisters, many relatives and friends and those who had association with her home town of Wingen.  After the Mass Sister was buried in the Sisters’ section of the Lochinvar Cemetery.