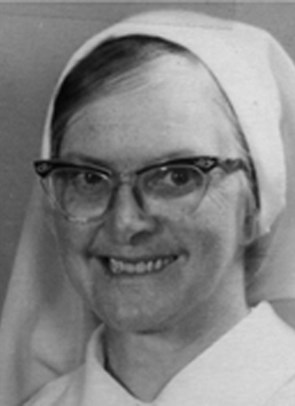 Hazel Thelma Lucy Gilbert was born in Enfield on 24th June 1915, the daughter of Reginald George Gilbert and Lucy Knight.  She had a sister, Beulah. Hazel was only nine years old when her mother Lucy died and her father remarried Nell Toohey who became a very dear mother to Hazel till her death in 1971.

After a short trial with the Marist sisters in Woolwich in 1936 Hazel entered the Novitiate at Lochinvar on 4th May 1938 and as Sr Mary Domitilla was professed as a Sister of St Joseph on 2nd July, 1941. She had been drawn to Lochinvar through a long time ‘pen pal’ relationship with Sr M Henrietta Walsh.

As Sr Mary Domitilla of the Patronage of St Joseph, she taught in varied schools of the diocese and beyond including: Lochinvar, Taree, Cessnock, Dungog, Swansea, Carrington and Summer Hill. She was a meticulous and precise teacher who always took the greatest care of her classes and who was always interested in the children’s progress. After years in the classroom, Hazel moved on to managing the shop at St Joseph’s College, Lochinvar.

In 1987 Hazel became a resident at Cardinal Freeman Retirement Village in Ashfield where she delighted in exploring her skill with a Box Brownie Camera. Later she took on a more modern version to capture beautiful scenes and particularly flowers which gave her immense pleasure.

In November, 2000, Hazel transferred to the Hostel section of the Village where Sr Ruth Boland became her devoted carer until she moved on to the nursing home and finally in 2009 she came back to the Hunter to be cared for lovingly by the staff at the Calvary Retirement Village at Allandale near Cessnock.  It was there that Sr Hazel died very peacefully on Monday 29th March 2010.

Her Funeral Mass was celebrated in the convent chapel at Lochinvar and her burial took place in the Sisters’ section of the Lochinvar cemetery.