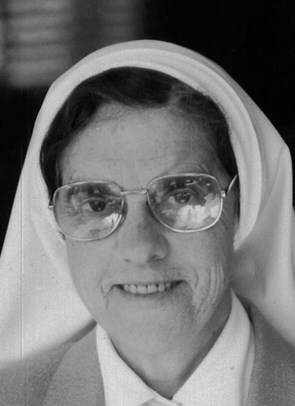 Hazel Rosanna Jane Parmeter was born in Murwillumbah on the far north coast of New South Wales on 7 September 1918 to Francis Parmeter and Ivy Casey. She was the third child, being a little sister to Norman and Heather and big sister to Darrell, Ron and Iris. Her father's work took him to various towns in NSW and Queensland. It was in Kurri Kurri that the family first came into contact with the Sisters of St Joseph of Lochinvar. When she left school, Hazel worked as 'pupil teacher' with the Sisters of Mercy in Sydney for twelve months. However on 19 March 1937 her strong sense of vocation led her to the Novitiate at Lochinvar, following in the footsteps of her older sister, Heather who had taken the name of Sister Mary Martha. Hazel was given the name of Sister Joseph Mary.

After her profession on 3 January 1940, she taught extensively in both primary and secondary schools throughout the Diocese of Maitland-Newcastle at Largs, Taree (twice), Krambach, Belmont (twice), Denman, Wingham, Newcastle, Merewether, Merewether Beach, Lochinvar and Wauchope in the neighbouring diocese of Lismore. A woman of many talents, Sister Joseph Mary held the position of school principal in most of the primary schools. She was very supportive of young teachers, giving them helpful teaching hints. She brought great creativity and freshness of approach to her teaching, helped by the wonderful artistic gift that she had. She was involved in imaginative school concerts with her extraordinary painted props and backdrops being the highlight of the various items and operettas.

In 1969 Sister Joseph Mary responded to a new challenge when she was appointed the Coordinator of Catechists in the State Schools for the Newcastle area. This involved catechist training and support, teaching religion classes in six primary and five secondary schools as well as sacramental preparation, home visitation, youth groups and social activities.

From 1976-1986 she was coordinator of the City State Schools Apostolate based at Broadmeadow catering for the needs of Catholic children in State Schools in the Mayfield, Adamstown, Broadmeadow, Hamilton and Newcastle areas.

From 1990 Sister Joseph Mary struggled with ill-health. She came back from death's door several times after her motor accidents and heart surgery. She found her sickness hard to bear, especially the sense of confinement that it brought. She regained some peace of mind when she came to retire in the lovely surrounds of Lochinvar. When she needed more assistance she was cared for at Swansea and at Mt Carmel Hostel in Maitland before returning to the Nursing Home at Lochinvar where she died on the feast of St Martha on 29 July 2000. After the celebration of her Funeral Mass in the convent chapel she was laid to rest in the Sisters’ section of the Lochinvar cemetery.