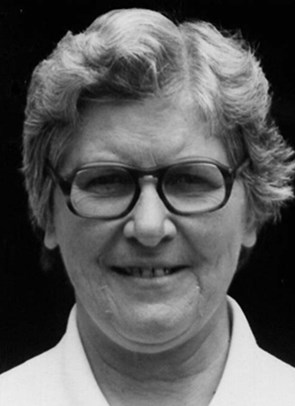 Irene Rita Hollis was born in Wauchope on 11th October 1924, the sixth child of the seven offspring of Francis George Hollis and Ethel Catherine Roach a respected farming family from Hollisdale in the Hastings Valley of NSW.  Her English ancestors, Newman and Martha Hollis, had come to the area in 1844 and selected land that became the family heritage.

Growing up in a staunch and loving Catholic family, Irene absorbed a deep and loyal faith that blossomed in her womanhood.  Following some years doing general office work, Irene decided to join the Sisters of St Joseph who had taught her in Wauchope and Port Macquarie, and came to Lochinvar on 1 January, 1944. In 1945, as a novice under the guidance of Mother M. Barbara, Irene completed the Leaving Certificate.

Professed on 2 July, 1946, Irene began her long and varied teaching service, moving from Primary classes in Cessnock, Merewether and Swansea, to Secondary classes in Science and to Home Science which she pioneered in pre-Wyndham days in our Junior Secondary school at Summer Hill in Sydney. For many years, Irene had charge of boarders, in Taree and Lochinvar, and, in this role, brought her deeply intuitive and sensitive nature to the care of hundreds of teenage girls.  In 1978 she became the first full-time Boarder mistress for the senior students at Lochinvar.  She shepherded her charges through the difficult years of refurbishment of the boarding facilities and was delighted to be a catalyst in providing more suitable accommodation for these young women.

1985/6 were years of change for Irene. She went to the Assumption Institute in Victoria, where she refreshed herself, gained a certificate in Clinical Pastoral Education (CPE) at Mercy Hospital, Sandringham and prepared to take on pastoral work within the Maitland diocese.  Batteries recharged, she launched into parish work in Merriwa and chaplaincy at Royal Newcastle Hospital. She ministered there until 1995 and then became Pastoral worker and Community support person in Tuncurry- Forster and Gateshead. In 2002, Irene was one of the original group to take up residence, in retirement, in Tenison Apartments, Swansea, where she lived till 2006. Ill health and increasing immobility soon became part of Irene’s daily cross.

In 2006, Irene moved to nursing care at St. Joseph’s, Sandgate. Patient suffering and calm acceptance marked her years there. Her health deteriorating in the last two weeks, Irene faced death with courage and a steadfast spirit. Very consciously, she placed herself in God’s loving hands and, early on Friday evening, 17 June, she peacefully slipped away. May her dear soul rest in peace!