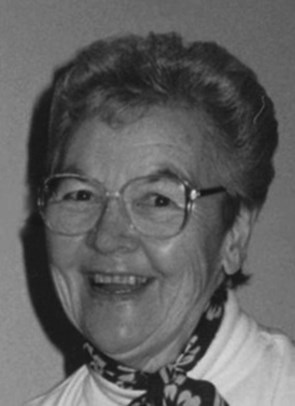 Kathleen Veronica Cross was born in Kahibah in Newcastle on 22 June 1930, the fifth of seven children of John and Patricia Cross. The family knew hard times growing up during the depression years.

Kathleen entered the novitiate at Lochinvar on 19 March, 1948, was given the name of Sister Jean Marie and was professed as a Sister of St Joseph on 3 January, 1951. She then embarked on her life of service manifested in a variety of ministries. Initially and for many years it was as an enthusiastic and creative primary school teacher in parishes throughout the Diocese of Maitland-Newcastle and beyond, often having the role of school principal.

In the following years Sister Jean Marie worked at the Catholic Schools Office as the Religious Education Coordinator for primary schools, before ministering to people living with AIDS at MacKillop House in Carrington. She was also a member of the Congregation’s Leadership Team 1982-85. Her great love was parish ministry, having a special gift for encouraging, supporting, affirming and enabling people to participate in the life and mission of the parish. She longed to "sing a new Church into being - one in faith and hope and love". For ten years until her retirement to Cundletown in 2007 she was the much-loved Pastoral Associate in the Muswellbrook Parish, supporting grieving families, visiting sick parishioners, helping to establish small church communities as well as being a familiar presence in the parishes of the Upper Hunter region. Over the years she lived and worked in Kurri Kurri, Merewether, Cardiff, Largs, Forster, Gateshead, Clifton Gardens, Summer Hill, Windale, Booragul, Lochinvar, Wallsend, Merriwa and Muswellbrook.

With her happy disposition, sense of humour and keen interest in people Sister Jean Marie made and retained a wide circle of friends. She was diagnosed with a brain tumour eleven months before her death. During those months she was an inspiration to all who visited her because of her joyful spirit, positive outlook and concern for others until the very last day of her life.

Sister Jean Marie died suddenly in the early hours of 31 July 2008 in the Elizabeth Gates Nursing Home in Singleton. After the celebration of her Funeral Mass in the convent chapel she was laid to rest in the Sisters’ section of the Lochinvar cemetery.