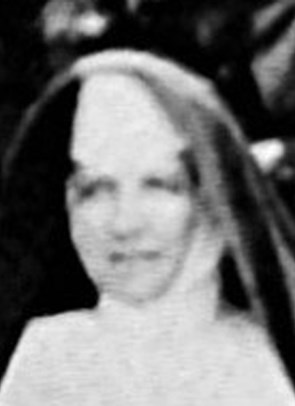 Sr. Mary Benignus of the Annunciation was the first of the four daughters of Patrick and Catherine Tobin to become Sisters of St. Joseph at Lochinvar. Born at Largs on the 31 March, 1878 Julia Tobin became a postulant on 25 March 1899, a week before her twenty-first birthday. On 26 September of that year she received the habit.

Sister’s active apostolate began in January 1900 when she went to Dungog. After the annual retreat she was appointed to Burwood where she worked till June, 1901. She then remained at Lochinvar for the remainder of the year to prepare for her religious profession which took place, with that of Sr. M. Bernard Walsh, on the 10 January, 1902.

After her profession Sr Mary Benignus taught at Carrington before being appointed again to Burwood. During her teaching career in the Congregation she also worked at Merriwa, Cessnock, Dungog, West Wallsend (new foundation), Kurri Kurri, Charlestown (new foundation) as well as in the Lochinvar Primary School. Sister was appointed the superior of some of these convents. She was an efficient manager and a dedicated teacher. It was written of Sr. M. Benignus: "She was a most successful and enthusiastic educationalist and one whose outstanding integrity won universal esteem." Sentinel 1937

In July, 1917 Sr Mary Benignus was appointed Sister Assistant by Mother M. Aquin, a position she held for the following six years. These were busy, care-filled years which entailed much coming and going amongst the Sisters in branch houses as well as having Lochinvar house and school commitments. She was a very active Sister Assistant. When relieved of this office in June, 1923 Sr Mary Benignus returned to the branch convent apostolate as superior in Kurri Kurri.

Sister M. Benignus had suffered bouts of illness from time to time and by 1935 it was evident her health was failing. Her last appointment was to Merriwa where she was forced to resign her superior-ship because of illness although she returned there for a few months with Sr. M. Anthony, her sister who succeeded her. In September 1936 she became so ill that Mother M. Dorothea and Sr. Annunciata went to Merriwa and brought her to the Infirmary from which she was taken to Sydney and thence to the Mater. In January 1937 she returned to the Infirmary from hospital. We read in an account of her death:

"She had suffered for some years silently, as anyone knowing her intimately, would expect. Eventually, however, indomitable powers of endurance were forced to yield and for some months before her end she gave herself patiently into the hands of the infirmarian." (Ibid)

Sr. Mary Benignus Tobin died at 3.30 am on the 25 April, 1937. Her funeral took place on the 26 April to the Lochinvar Cemetery. Fr. Ward conducted the service and seven priest assisted. Solemn Office and Requiem Mass were offered in the Convent Chapel on the 28 April, 1937.