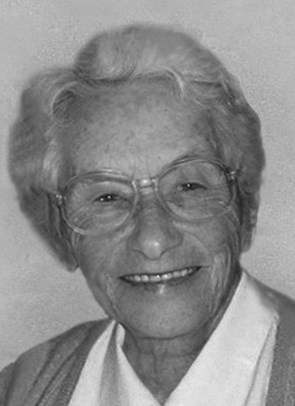 Loretta Mary Mullins was born in Wingen to Leonard Mullins, the postmaster and Edna Duff on the night of 3 July, 1924. As there was Mass the next morning, her aunt took her to the church to be baptised before returning her to her mother.  Loretta had two siblings, elder brother Les and younger sister, Mary.  Loretta loved Wingen, the tiny but very pretty country village at the head of the Hunter River Valley between Scone and Murrurundi in the shadow of the Burning Mountain.

Wingen was remote from any Secondary School and times were hard because of the Great Depression so Loretta went to live with her aunt and uncle in Tamworth so she could attend St Dominic’s School as a day pupil for her secondary education.  Loretta loved the Dominican Sisters but when she felt the call to religious life it was the Josephite Sisters of her home town that drew her to enter the Novitiate at Lochinvar on 1 January, 1941.  She entered straight from school, aged almost seventeen and took the name of Sister Mary David of the Holy Name of Jesus.   After her Profession on 6 July 1943, she stayed on in Lochinvar to do her teacher training and to teach music.

In 1946, Sister Mary David left Lochinvar on her first appointment to Cardiff as an Infants and Music Teacher. Thus began her ministry of forty years, teaching infant and primary classes, often with music lessons before and after school.  For the last seventeen of those years she was the Principal.  Her appointments across the diocese of Maitland-Newcastle and beyond were at Merriwa, The Junction, Abermain, Cessnock, Bulahdelah, Swansea, Taree, Gateshead, Windale and Kurri Kurri. She was known as a firm but friendly teacher with a ready smile who loved the children and was especially kind to those in need.

In 1985 Sister Loretta did a renewal course which included a pilgrimage to the Holy Land.  What a joy this was for Loretta to walk the land where Jesus had walked! Prayer and the meditation on the Scriptures that had always nourished her ministry took on even greater significance.

Following this experience Sister Loretta  began the second phase of her ministry – that of pastoral care, first in the former Nursing Home at Lochinvar for two separate terms and as a pastoral worker in the Merewether and Kurri Kurri parishes. In these places she was a constant visitor to the sick, house-bound and elderly parishioners who loved her cheery visits when she brought them Holy Communion.  Her service extended to doing their messages and accompanying them to appointments.  Her interests kept her engaged in life.  She loved gardening, crocheting, following cricket, tennis and rugby league and she mastered the mobile phone, the Ipod and the iPad which enabled her to read her E books in large print.

While her health declined her mental capacity remained as sound as ever.  During her last years spent at Lochinvar Loretta endured many operations and hospital stays.  It was in the Maitland Private Hospital that she died on 30 July 2016 just weeks short of her ninety-second birthday and in the seventy-third year of her religious profession. After the celebration of her Funeral Mass in the convent chapel she was laid to rest in the Sisters’ section of the Lochinvar cemetery.