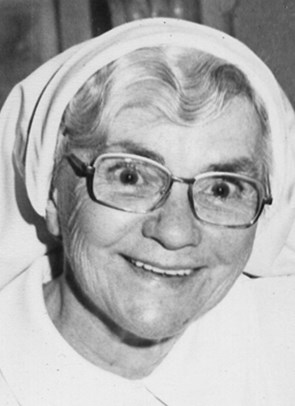 Mary Angela Boyle was the eldest of twelve children born to Henry Francis Boyle and Florence Elizabeth Cook on 27 July, 1913 in East Maitland. Her father who was building the convent at Lochinvar at that time brought his new-born daughter to show her off to the Sisters.  Mother M Aquin took her in her arms and in the old chapel dedicated her to Our Lady and St Joseph and on handing her back to her proud father said: "Bring her back to us when she is ready." Seventeen years later, Mary wanted to enter but had to wait until the tenth child, Sr Mary Cabrini was born.

Mary entered the Novitiate at Lochinvar on 19 March 1931, was given the name of Sister Mary Alexius and was professed as a Sister of St Joseph on 3 January 1934.  She then embarked on her apostolate of teaching school and music with zeal and enthusiasm for many years.  Her appointments were to West Wallsend, Cardiff, Aberdeen, Wingen, Krambach, Summer Hill, Wauchope, Port Macquarie, Dungog, Merriwa, Carrington and Cessnock.

In 1969 she was called by the Lord to walk the path of ill health. Though her active work in schools ceased, her interest in people, her enthusiasm for life, her creative mind, her artistic fingers and her love for God and others were inspirational to all who knew her, to the end. Her activity went on unabated as she was always busy doing something for others: sewing, painting and writing letters that brought expressions of love, consolation and of encouragement to many. This letter- writing was for her a real, though hidden, apostolate and one that achieved much good.

A woman of strong faith that had come to her from her ancestors, Sr Alexius had a tender and deep devotion to Our Lady and St Joseph.  She loved her Sisters in religion and had a strong capacity to love her family and made every effort to strengthen that bond of love to ensure their growth in the love and knowledge of God.  She was the Chief of Clan.

Sr Alexius died as she had wished, with her community of Sisters in the convent at Summer Hill in Sydney on 26 March 1986, aged seventy-three, in the fifty-fifth year of her religious profession.  After the celebration of her Funeral Mass she was laid to rest in the Sisters’ section of the Lochinvar cemetery.

Based on the writings of her brother, Brother Valens F.M.S. Easter Tuesday, 1986