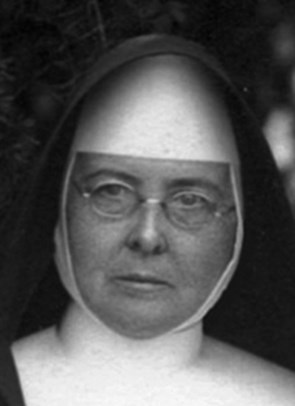 Matilda Cahill was born at Strokestown Co. Roscommon in Ireland on 17 August, 1861, the daughter of John Cahill and Annie Emerson. Her home was not far from the great holy mountain of Croagh Patrick. She had at least one brother and one sister who also migrated to Australia. Her brother settled in Brisbane and her sister became a Sister of St Joseph in Tasmania where she was Sister Guardian for some years.

On a visit from Ireland to her brother in Brisbane she met and came to know Father Julian Tenison Woods who was at that time in the process of setting up the Institute of the Sisters of Perpetual Adoration. "To him she confided her desire to serve God in the religious life, and he sent her to the young Josephite community at Perthville, near Bathurst." (Lochinvar Magazine 1947) She entered St Joseph's Convent, Vale Road Perthville on the 15 January, 1882, was given the name of Sister Mary Aloysius of the Seven Dolours and made her first profession on the 24 May, 1883. On the 28 August of the same year she left the Vale with three companions to make a foundation in the Maitland Diocese.

On 2 September, 1883 Sister Aloysius and her companions were welcomed by the clergy and people of Maitland and Lochinvar and commenced their apostolate the next day as members of the Congregation of the Sisters of St Joseph of Lochinvar. In the first years of the new foundation she taught at Lochinvar and the records show she was active in visiting the parishioners of the district and taught Sunday school.

During her long life as a religious she worked in many places, carried many responsibilities and saw the young congregation grow and strengthen. At the age of twenty-three, she went as sister in charge of the first branch convent at Merriwa on the 6 January, 1885 accompanied by two novices. This position she held till June 1900. Sister was to be a founding member of other houses, sometimes as superior, at other times as a community member. After her years in Merriwa she was transferred to Cessnock then to Dungog, followed by a return to Merriwa until she was again asked to head a new branch house in Aberdeen.

In June 1897 Sister Aloysius left the Diocese on the 6 October with the permission of the Bishop on a transfer to St Joseph's Convent, Oatlands in Tasmania. Her sojourn in Tasmania was brief as she arrived back at Lochinvar six months later. She was accepted as a visitor in the convent till the bishop approved of her rejoining the community which she did on the Christmas Eve December, 1897. On her return Sister Aloysius ministered in Largs, Krambach, Cessnock, Burwood (Merewether), Wingen and Port Macquarie. Later she is remembered as a very hospitable portress at the Mother House.

In October 1914 she had the pleasure of a reunion with Sister Ambrose Joseph (the leader of the 1883 group who had transferred to Tasmania) who came to Lochinvar on a short visit. Her own sister, Mother Mary Columba visited from Tasmania in April 1915. On 24 May, 1933 Sister Aloysius celebrated the golden jubilee of her profession, the first golden jubilee in the congregation. The day was made memorable by Solemn High Mass presided over by the bishop. September 1933 was another milestone - the 50th anniversary of the foundation at Lochinvar. Sister M. Benedict, who had sent the Sisters from Perthville and Sister Ambrose Joseph came to rejoice with Sr. Aloysius and the Lochinvar Sisters on the achievements of half a century of work in the diocese In late 1933 she, accompanied by Mother Mary Aquin travelled to Brisbane probably to visit her brother or members of his family.

Unfortunately she broke her hip, leaving her partially incapacitated. She suffered another fall in 1940, coming from Mass in the Chapel and again spent some months in the Mater Hospital. Upon her discharge she was not able to walk again and spent the remaining years of her life as an invalid. She suffered much during these years but always with patience and faith, eventually being confined to bed. Sister Mary Aloysius died in the Infirmary at Lochinvar on 30 June 1947 with the Sisters around her.

"On 30 June, at the age of eighty-six Sister Mary Aloysius Cahill passed to her eternal reward at St Joseph's Convent, Lochinvar. She was the last foundation member of the Institute at Lochinvar and her death has left a void in the hearts of her Sisters. One of the little group of four sent in 1883 from Perthville to establish the convent at Lochinvar, she faced difficulties undreamed of in these our days. A cultured woman, she hated publicity - a brave woman, she did hard things quietly, walking in hidden paths. She looked straight to God, and God was her support in all things.

She was laid to rest on the 1 July in the Lochinvar cemetery, where the remains of two of her Perthville companions, Sister Mary Imelda Flood and Sister Mary Baptist Dugan repose. Her own sister, Mother Mary Columba Cahill, passed away in (1946) in Tasmania. … Also in Tasmania is Sister Mary Joseph Dirkin, leader of the brave little Lochinvar expedition of 1883; through weight of years and infirmity she is quietly awaiting the Master's call." Maitland Catholic Sentinel 1947-08-01