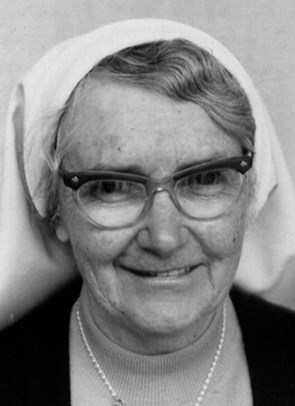 Kathleen Anne Gill was born in Epping on 29 June 1907. Three weeks later she was baptised in St Peter‘s Church, Surrey Hills, not far from Elizabeth Street where Fr Julian Tenison Woods had died less than twenty years before.

Her father, Samuel Gill migrated from England. He was not a Catholic but was happy for all the children to be brought up in the Catholic faith of his Irish wife, Brigid Garvey. Kathleen, Beatrice, Doreen, Harry, George and Reginald grew up in a very happy family, much influenced by the faith of their mother and her love of Mary and the quiet strength of their father.

Kathleen's primary schooling was at Our Lady Help of Christians School at Epping and then with the Sisters of St Joseph at Granville where the family moved when Kathleen was ten. For sixth class and all her secondary school classes Kathleen attended the Mercy Sisters’ School at Parramatta. During this time Kathleen learned to live with suffering in her home, enduring the sad and fatal illness of her younger sister, Beatrice.

After her school years Kathleen went to the Sydney Teachers Training School and then taught for about five years in State Primary Schools at Granville and Merrylands. At this time she became a member of the Children of Mary Sodality at Granville.  This was one of the important events of her life.

Kathleen was then appointed to teach in the State School at Dungog. There her life took a new direction as for the first time she met the Sisters of St Joseph of Lochinvar.  After three and a half years, Kathleen joined the Sisters at Lochinvar, entering on 26 July 1935 and taking the name Sister Anne Louise.  She took her first vows on 5 January 1937.  During her Novitiate years she taught  fifth class at Lochinvar and also taught maths and elocution in the Secondary School. The years of World War II saw Sister Anne Louise on the Lochinvar Secondary School staff. In 1944, she and her family grieved at the death in the war of their dear brother, Harry in England.  They rejoiced when the next brother, George returned home safely after four years at war.

Later in 1944 Sisters Anne Louise and Marie de Lourdes both matriculated to gain entrance to the University of London, passing in French, Latin and Logic. The subsequent studies gained both a Bachelor of Arts degree from the University of London in 1947.  They completed their studies while continuing to teach their classes in the school.

The next thirty years saw Sister Anne Louise as teacher at Lochinvar, then as principal at Taree, Port Macquarie and Merewether Secondary Schools, till her election in 1967 for a six year term as Vicar General of the Lochinvar Congregation. At that time, in 1966 and 1967 she completed a course of Seminars in Theology. In 1969, she was elected Chairperson of the commission tasked with writing the new Constitutions of the Australian-New Zealand Federation of the Sisters of St Joseph, a task that took nearly twelve years. This work was the culmination of her   active life.

While Vicar of the congregation, Sister Anne Louise taught again in the Secondary School at Lochinvar and at St Anne's Senior Girls School in Adamstown while living at Cardiff.  She returned to Lochinvar in 1980, assisting in the Library before retiring in 1983 to join the Sisters at Shortland till her admission to the Nursing Home in June that year.

On 6 March 1973, after taking part in the Melbourne Eucharistic Congress, Sister Anne Louise wrote to all the Sisters speaking of the Eucharist and the sick and “the loneliness and suffering known only to oneself and God” and further on wrote “in the strength of the Eucharist, the Cross is cheerfully accepted and borne” and so she lived. She was a woman of great intellect with skill in French and Maths, Latin and English. She served God and others according to the gifts God had given her and she was greatly gifted.  She was also a woman of integrity.

Sister Anne Louise Gill died in Lochinvar early in the morning of 26 August 1990 after a long illness.  After her Funeral Mass celebrated in the convent chapel, she was laid to rest in the Sisters’ section of the Lochinvar cemetery on 28 August 1990.