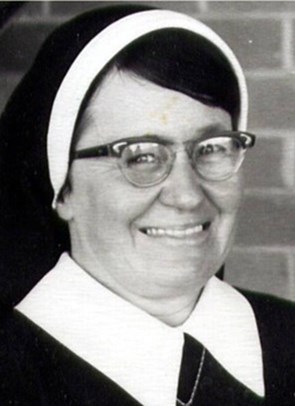 Monica Mary Toomey, the daughter of Joseph Toomey and Mary McCall was born on 23 December 1924 at Merewether.  She grew up in Merewether as the youngest of four children. Her brother, Leo died in the second World War; her sister, Veronica died at twenty-three and her other brother, Joe who was an invalid most of his life died at fifty-eight.

Monica entered the Novitiate at Lochinvar on 1 January 1943 and was given the name Sr Mary Antonia of the Immaculate Conception.  She was professed on 4 July 1945 with Sisters Elsie Krelle, Mary Jackson, Eileen Page, Mary Francis and Louise Marie.

After profession she ministered in Swansea, Cundletown, Gresford, Edgeworth, Morisset and Swansea but spent most of her life at Lochinvar where she ministered for many years in St Joseph’s Nursing Home.

Small of stature, Toni, as she was affectionately known, was little in every way and in the most beautiful sense of the word. She knew herself to be unconditionally loved by God, by her family, her friends, her Sisters in religion, those she worked with and especially all those she loved and cared for in the Nursing Home. Her winning smile at every turn could melt anyone’s heart.

She lived out to the fullest Mary MacKillop's words "Never see a need without doing something about it" and Julian’s words "We are but instruments in the hands of our God."

No matter who needed care she gave them all she possibly could. Her hands, feet, eyes and ears were those of Christ to them. Her hidden service of others was one of her shining gifts — nothing was ever too lowly, too time-consuming.  Time never seemed to worry Toni, even though it certainly worried those whom she often kept waiting.

Wherever Toni went there was laughter and there was love: love especially for those in the Nursing Home. At community Masses Toni scarcely ever came alone: almost invariably she was a companion for someone from the Nursing Home. Her life was the life of grace in action.

She enjoyed life, loved fun and had the gift of not letting worry wear her down. She was a very forgiving person and had an innate trust in God and the gift of handling every situation with trust and belief in herself— even if at times no one else had.

When the Nursing Home closed at Lochinvar in 2001, Sr Antonia transferred with other patients to the Mercy Home in Singleton.  She died there very peacefully on 13 February 2005.  She is buried in the Sisters’ Cemetery at Lochinvar

Based on the words of Sr Celie Creigh and Fr Jim Saunders, 16 February 2005