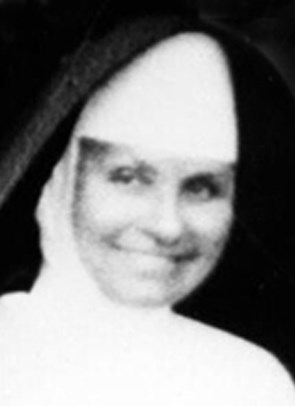 Theresa Moylan who became Sister Mary Augustine of Our Lady of Dolours, was a daughter of Thomas and Johanna Moylan (nee McDonald). She was born on 18 October 1874 in Oakhampton. Her father, Thomas was a native of Ireland. He spent seventy-five years farming in the Maitland district. Theresa was one of a large family of seventeen children, fourteen of whom survived. Several became religious: Lucy became Sr Mary Regis at Lochinvar. Srs M. Anne and Claver were Dominican Sisters. Brigid entered with Theresa but only remained a very short time; another sister, Annie entered in 1906 but left as a novice because of illness. She died in 1908.

Theresa was educated at the Dominican Convent in Maitland and had a life-long affection for the Dominican Sisters. However, she entered the Novitiate at Lochinvar and received the habit with Sister Teresa Kauter on the 6th July, 1898 and made her First Profession on the 4th July, 1900.

Sr Mary Augustine spent most of her thirty-five years as a religious at Lochinvar where she taught in the Primary School and for many years took care of the boarders. It was said of her: "Sr Augustine did for primary education at Lochinvar what Sr Bertrand did for secondary education." She introduced the Lewis Method of teaching reading into the schools and demonstrated it herself with great success.

Hers was a life of zeal and self-sacrifice. The great number of ex-students who were her care during the years when she was their Sister in Charge, cherished tender memories of her. With an intuitive knowledge of child character, she encouraged virtue and eradicated faults. In her care of the boarders, Sister showed genuine concern for the physical, spiritual and academic welfare of the girls.

A few years prior to her death she was superior of the community at Aberdeen and there again her indefatigable zeal had wide scope in the care of the boys. Sister's health was never really good.

"Naturally frail, she had a life-long struggle with ill-health which she bore with heroic fortitude. The end came at Lochinvar after a painful illness of five months." Sr Mary Augustine died in the Infirmary in the presence of Mgrs Roche and the community at 8.15 am on 3rd April, 1933. Her burial took place in the Lochinvar Cemetery on the 4th after Office and Requiem.

Extracts taken from the Lochinvar Magazine 1933