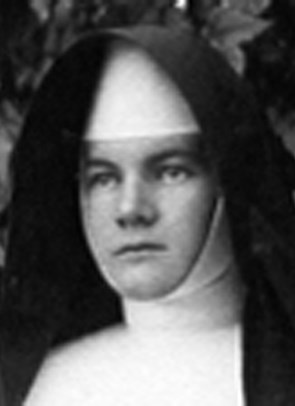 Margaret Walsh, born in West Maitland on 2nd September 1877, was the daughter of John Walsh and Margaret McDonald. She entered the Convent at Lochinvar in 1899 and was given the name of Sister Mary Bernard.

She was within a few days of completing her fiftieth year in religion when she died in 1949, and had spent those long years in excellent teaching work, both in the schools and as a music teacher. She ministered in Gloucester, Largs, Cessnock (Mt St Joseph’s), Aberdeen, West Wallsend, Merriwa, Wingen, Kurri Kurri and Lochinvar. "Her pupils loved her while respecting her strict exactness, her friends revered her and her Congregation will never forget her love of the Rule and her supreme fidelity to prayer.” (Extract from the Maitland Sentinel)

“Sister Mary Bernard’s call was a sudden one. On Sunday morning, 10th July 1949, she was on her way to the chapel for 7.30 Mass when she collapsed with a cerebral seizure and a few hours later, fortified by the rites of Holy Church, she passed away.

The Solemn Office and Requiem was sung in the Convent Chapel and the funeral followed immediately.  The Most Rev Dr Gleeson presided and a choir of twenty priests were in attendance.

Sister M Bernard was laid to rest in the Convent portion of the Lochinvar cemetery.