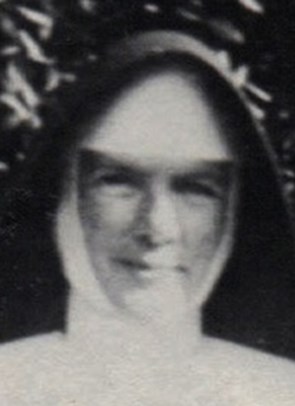 Catherine Crowe was the daughter of William Crowe and Sabina Barry and was born on 3 August 1877 in West Maitland.

On 23 May 1895 Catherine entered the Novitiate at Lochinvar, where a number of her school companions (pupils of the Dominican Nuns in Maitland) had preceded her. Two of her own sisters followed her: Alice (Sr M Bonaventure) in 1904 and Mary (Sr M Francis Borgia) in 1910.  Catherine was professed as Sr M Bertrand of Our Lady Help of Christians on 6 July 1998.

In the beginning of her religious life, she was stationed at various branch convents: Wybong, Glendonbrook, Merriwa, Merewether and others, but eventually was permanently placed at Lochinvar as principal of the school where she became, as the years advanced, a pillar in the educational work of the Institute.

With the number of boarders at Lochinvar increasing, and many of them having done super-primary work, it was deemed necessary to raise the classification of the school.   So in 1915, under Sr Bertrand’s leadership, it became a Secondary School of Intermediate standard. Five years later, in 1920 with Sister M. Bertrand still the principal, it was fully registered under the Bursary Endowment Act of 1912.

Sr Bertrand was, as one exstudent put it, "a very gentle, very humble, very holy and talented nun, who influenced and shaped my mind more than any other person in my life."  Another said, "She was a woman of many parts, a born teacher who could take the dullest subject and make it interesting. There was never any strict formality in Sister Bertrand's classroom, never any raised voices or angry words. She knew instinctively that one cannot 'teach', one can only induce in pupils the desire to learn. Sister Bertrand did just that. Her lessons are exciting voyages of discovery, during which she and her co-adventurers set out to find the fascinating facts that showed themselves intriguingly half-hidden on the horizon's rim."

She lived for God and for His sake, she loved the world. Her life was a prayer: one long, enduring Act of Charity which touched and influenced the lives of all who knew her. In 1940 S.M. Bertrand was obliged to resign her post as Principal of Lochinvar College on account of ill-health. Her place was taken by one of her first Leaving Certificate class, Sister M. Joan.

After her retirement from Lochinvar, Sister spent some rest periods at Merewether and Taree where she delighted to be able to give any advice or aid as her health would allow.

Returning to Lochinvar, Sister was confined to the Infirmary for some months with a stroke and after some years of weary and painful waiting, the peaceful end came on Monday 18 January 1954. Her death was most peaceful with Very Rev Fr Ward and the Sisters around her.

The interment in the Sisters’ cemetery at Lochinvar took place the following morning after Solemn Requiem Mass and Office in the Convent Chapel. His Lordship, Most Rev. J. Toohey, D.D., Coadjutor Bishop of Maitland, presided in the sanctuary and officiated at the graveside. A choir of thirty priests attended, including the Right Rev. Mgr. V. F. Peters, V.G. from Hamilton. Celebrant of the Mass was the Rev. J. Brennan, with the Revs. M. Farrelly (a former pupil of Sister M. Bertrand) deacon, D. M. Heffernan sub-deacon and J. F. Lavery master of ceremonies. Cantors were the Revs. J. Delaney and P. Purcell.