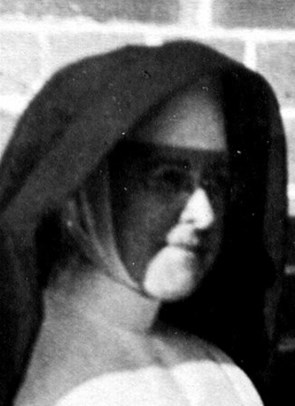 Catherine was one of the three daughters of John Joseph and Mary Gallagher (nee Moy) to enter the Sisters of St Joseph at Lochinvar. Catherine was born at Krambach on 24th September, 1883, just weeks after the Sisters of St Joseph made the foundation in the Maitland Diocese at Lochinvar. Her sisters in the congregation were Sr Mary Alacoque (Brigid) who died in 1960 and Sr Mary John (Emily) who died in 1943.

Catherine became a postulant on 8 December, 1910, was named Sr Mary Boniface of the Immaculate Conception and received the habit on 21 June, 1911. She made her First Profession on the 2 July, 1913 after which she was appointed to Largs where she was located for the next two years.

Sister M Boniface later taught music in West Wallsend, Wingen and Carrington but the greatest part of her religious life was spent at Lochinvar where she taught music and fancy needlework for which she was renowned. It was noted of her work at Lochinvar: "This loved Sister was one of the most familiar figures at Lochinvar for many years. Her smiling face and her deft fingers are among the most edifying memories of the school for hundreds of girls." (Lochinvar Magazine 1930)

Sr M Boniface's health was never robust but she went uncomplainingly about her tasks, walking with the aid of a stick. To quote the 1930 Lochinvar Magazine again: "Though constantly in pain, it was not allowed to dim the brightness of her cheery smile or interfere with her duty of music teaching." She was hospitalised at Lewisham Hospital for a serious operation. Although the operation was successful, she died suddenly at 2.30pm on 7 March, 1928 from a cerebral embolism in her forty-fifth year. Her body was brought to Lochinvar on 8 March and remained in the Chapel till the funeral at 4 pm which was conducted by Fr Coady.

Office and Requiem for the repose of her soul were offered on 9 March 1928. Fr. Youll was the celebrant and the Bishop presided. To quote from a tribute to Sr. M. Boniface: “... her countless friends cherish deeply the memory of a true and self-sacrificing friend and a thorough religious.”

Sister Mary Boniface Gallagher is buried in the Sisters’ section of the Lochinvar cemetery.