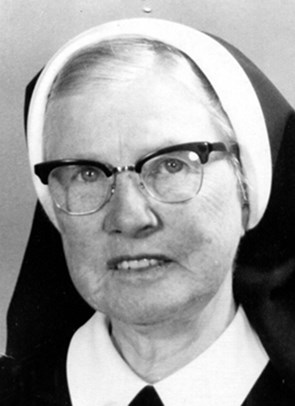 Kathleen Hyacinth Hogan, the daughter of Patrick Hogan and Sarah Nelligan was born 23 April, 1891 at Cundletown. Her brothers were Michael, Frank, Richard and Rex and her sisters were Mary, Margaret, Kathleen and Eileen. Her father, Patrick Hogan was a police sergeant in Branxton and in the Manning area of Taree and Cundletown.

Kathleen entered at the Novitiate at Lochinvar on 2 February 1913 and took the religious name of Sister Mary Casimir of the Mother of God. After her profession as a Sister of St Joseph on 30 June 1915 at the age of twenty-four, Sister Mary Casimir began her ministry as a music teacher. During her life she was appointed to Kurri Kurri, Dungog, Taree, Charlestown, Wauchope, Cardiff, Aberdeen and Wingham. Sister was well liked by her music pupils many of whom returned to visit her on occasions.

In 1974 Sister Mary Casimir came to the Lochinvar Nursing Home from Taree. While in the Nursing Home at the age eighty-nine, an article in the local newspaper told of Sister her attending lip-reading classes at the Lower Hunter Community Care Centre, learning to communicate again with the world about her. Sister had gone deaf about three years previously. When she first began the classes she went as companion to assist another Sister. The staff soon noticed how much Sister Mary Casimir benefited from the sessions, too.

Sister was taken to the Mater Hospital at Waratah on 23rd July, 1982 and died on 25 July aged ninety-two, in the sixty-seventh year of her religious Profession. Sister Mary Casimir was laid to rest in the Sisters’ section of the Lochinvar cemetery after the celebrations of her Funeral Mass in the Convent Chapel.