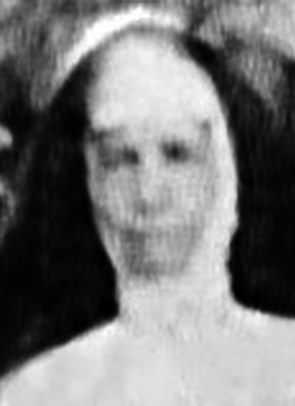 Mary Tobin was the third eldest child of Patrick and Catherine Tobin of Largs. She was born on 24th September, 1874. There were three boys and six girls in the family. Five of the girls consecrated their lives to God in religion. Her sisters, Mother M Liguori, C.S.B., entered the Brigidine Order at Coonamble; Mother M Anthony, Mother M Benignus and Sister M. Monica became Sisters of St Joseph of Lochinvar.

Mary entered St Joseph's Novitiate at Lochinvar on the feast of St Joseph, 19th March 1904 where she was given the name Sister Mary Celestine. She made her profession on 2nd January 19007. During her life as a Sister of St Joseph, Sister M. Celestine ministered in Abermain, Cessnock (St Patrick’s and Mt St Joseph’s), Gloucester, Brookfield, Lochinvar and Charlestown. She held the position of Local Superior in several branch houses. Though very unassuming, she was a zealous and successful teacher, especially in Christian Doctrine.

The pall­bearers were Messrs Patrick and John Tobin (nephews), Messrs T Delaney and K Burke (nephews-in-law). Forming part of the funeral procession were friends from Maitland, Morpeth, Cessnock and Newcastle as well as Lochinvar parishioners.

The Solemn Requiem and Office was celebrated at 10.30 a.m. March 31, with His Lordship Most Rev. J. Toohey, D.D. (Coadjutor Bishop of Maitland) presiding in the sanctuary and preaching the panegyric. Over forty priests were present, among them being three Redemptorist Fathers from the Monastery at Mayfield. As on the Monday afternoon, a large gathering of relatives and friends attended, as well as the religious Community and senior college students. Celebrant of the Mass was the Rev. J. Carson (a past pupil of Sister M Celestine) with deacon and sub-deacon Rev. G. P. Youll and J. J. Jenson. The master of ceremonies was Rev. J. Delaney. Cantors were Revs. J. P. Lavery and R. F. Smyth.