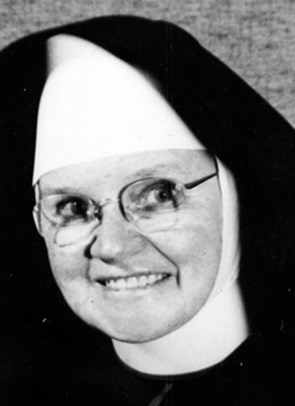 Mary never attended a Josephite School during her school years as her primary education was at the local public school and her secondary education was at Newcastle High School. After completing twelve months training as a pupil teacher, she was put in charge of a Provisional School in the Cassilis district of the Upper Hunter.

When Mary entered the Novitiate at Lochinvar on 23 January, 1918, Mother Mary Aquin was the Sister Guardian and Mother Mary Alphonsus was the Novice Mistress. Mary was given the name of Sister Mary Chanel of the Immaculate Conception.

After her Profession as a Sister of St Joseph on 29 June 1920 she began her apostolate of teaching at which she was very adept, teaching upper primary classes and secondary school classes during her many appointments. Sister Mary Chanel taught at Dungog, Kurri Kurri, Krambach, Wingen, Cundletown, Mt St Joseph's in Cessnock, Lochinvar, Merewether (twice) and Bellbird. In most of these appointments she was the principal as well as class teacher. Sister had a flair for drama, art and music. She encouraged a love of these subjects in her students.

From 1963 to 1971 Sister Mary Chanel taught in the Secondary Schools at Taree and Lochinvar. When her school apostolate came to an end she became involved in the Lochinvar Religious Correspondence School. This work of teaching Religion to children in State Schools and others in remote areas was very dear to her. Every year she tried to visit all the schools to which she sent lessons - Bulahdelah, Cassilis (40 pupils), Denman, Martindale, Sandy Hollow, Dungog, Krambach, Bunyah, Murrurundi (60pupils), Muswellbrook, Kayuga, Upper Rouchel (28), Morisset, Wyee, Cooranbong, Singleton, Jerrys Plains, Ravensworth, Whittingham, Broke, Bulga Milbrodale and Mt Pleasant (Carrowbrook).

Sister Mary Chanel remained active and interested in the life of the Congregation until her death in the Mater Hospital at Waratah on 18 August, 1978 from a cerebral haemorrhage. After the Requiem Mass in the Convent Chapel the burial took place in the Sisters’ section of the Lochinvar Cemetery.