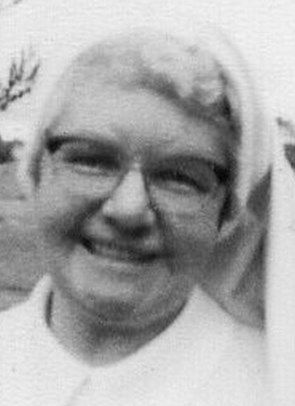 Isobel Doris, the third child of Hugh Doyle and Catherine Fitzgerald, was born at Oxley Island on the Manning on 1 March I904. Her parents and three children had moved from Bundanoon where her grandparents who had come from Ireland had land grants to the Manning District with all their possessions contained on three carts.

Dorrie, as she was known, had four sisters May, Anne, Catherine and Ellen and one brother, Leo all of whom predeceased her. Her mother died tragically when Dorrie was a very young girl.  However her father insisted on keeping the family together with the help of May and others. Dorrie did  her primary schooling at Lansdowne and her secondary at St Mary's College, Liverpool as a boarder. On her return home she cared for the home until her sister May was able to do so.

She entered the novitiate as a postulant on September 8, I922 and received the name of Sister Mary Cletus of Our Lady of the Sacred Heart. She was professed on 2 July 1925 and taught for a few years at Lochinvar.  Then for over thirty years she was principal of schools at Aberdeen, Merewether, Merriwa, Carrington, Clifton Gardens and Lochinvar. She was a splendid teacher, much loved and respected by her pupils.

From the early 1960's till the late 1970's Mother Cletus, as she was then known, was in Congregational Administration as Councillor, Vicaress and Mother General.  Perhaps the greatest challenge that she faced in her years of administration was the implementation of changes brought about by the Decrees of Vatican ll.  The diversification of apostolates, less structured community life, the modernisation of the habit, the adaptations of religious life to the needs of the times and all that was entailed in these changes, Mother handled in faith and with the understanding of the Spirit of Vatican II.  She did all that with much calmness, diplomacy and delicacy and above all with great sensitivity of each individual Sister of the Congregation.

In 1967 the Australian—New Zealand Federation of the Sisters of St Joseph was formed and from its inception Mother Cletus made a most valuable contribution to it. She became the first Treasurer of the Federation and played a very vital part in the building and establishing of the Federation House of Studies in Lyneham in the  A.C.T. in 1968 and the building and staffing of St Matthew's Primary School in the suburb of Page in Canberra in 1972.

Mother Cletus was a woman of courage, wisdom and inner freedom, continually searching for the truth, a fine leader and peacemaker, a witty story-teller, a woman at home with herself and with others, and a woman who lived life to the full as she continued over a lifetime to respond to God's call. One of her outstanding qualities was a sense of thankfulness to her God and to those who worked with her, supported her and cared for her.

When Mother Cletus' term of office was over in 1978, she gracefully retired to Wingham on the banks of the "Lordly Manning" where in her own words, "I spent five happy years”.  In January of I983, she came back to Lochinvar and was happily settled in the Nursing Home living in cheerful serenity coupled with a special sense of humour that had characterised her whole life.

Based on Words of Remembrance by Sr Marguerite Chapman.