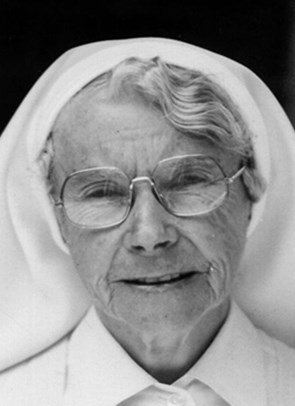 Ruby Gollan was born at Weston on 18th February, 1907 to John Gollan and Mary Smith. Her father was a shift worker and contractor in the coal mines. Her mother's father, Mr Smith was a policeman and later a hotelier.  Ruby’s brothers and sisters were William Thomas, Gladys May (Phillips), Angus Edward and Mavis Gloria who died in infancy. After her mother died, Ruby looked after her father and brothers until she entered Lochinvar Novitiate on 23rd January, 1927 and became known as Sister Mary Clotilde. Sister Catherine Barry was her first Novice Mistress followed by Mother Mary Bernadette.

Sister Mary Clotilde was professed on 2nd January, 1930. Sister then went out to carry out her Apostolate in the schools of the Diocese under the care of the Sisters of St Joseph. Sister taught children in the Infant classes and lower primary classes at Port Macquarie, West Wallsend, Denman, Charlestown, Lochinvar, Merewether, Largs, Cessnock, Taree, Aberdeen, Summer Hill, Wingen, Cardiff, Merewether Beach, Gloucester, Kendall, Windale, Belmont, Toronto and Swansea. During her many years of service, she worked in over twenty-five of the Congregation's schools in Dioceses of Maitland and Lismore, sometimes on two occasions.

In 1977 Sister Mary Clotilde retired from the school Apostolate and went to Swansea. From then to her death in 1997 Sister spent her time quietly in communities until she returned to the Lochinvar Nursing Home where she died on 8th July, 1997 after a long life of ninety years.

After Requiem Mass celebrated in the Convent Chapel Sister Mary Clotilde was buried in the Sisters’ portion of the Lochinvar Cemetery.