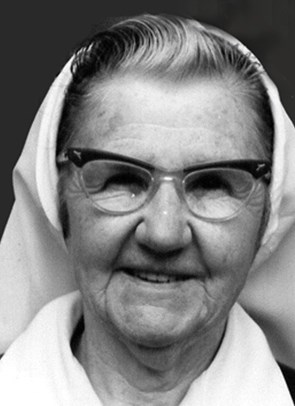 Mary Monica Catherine Desmond was born on 27 May, 1911 in Kempsey. She was the fifth and youngest child of Daniel James Desmond and Margaret Mary Spicer and a younger sister to Nellie, Bert, Thomas (who died in childhood) and James. She grew up on a diary farm at Taylor’s Arm on the Nambucca, a place she called "home" to the very last and where she often returned in the holidays to walk by the river to refresh her energies for the year ahead.

At home the family prayed the Rosary every night, each taking a mystery and went to Mass each weekend or each month, as circumstances allowed. Nellie, the eldest in the family left home to become a Daughter of the Sacred Heart in Kensington when Mary Monica was about seven and became a missionary on Thursday lsland and later on “aboriginal missions” like the one at Bowraville not far from Taylor's Arm.  On a return journey with her family from a visit to Nellie they diverted to visit her father’s cousin, Sister Lucy Doran at the Convent in Abermain. The simple homeliness and friendliness of the Sisters in the community became the instrument in her decision to join the Sisters of St Joseph.

Mary Monica entered the Convent at Lochinvar on 19 March, 1934 aged twenty-two.  She was named Sister Mary Conleth of St Joseph (an appropriate title as she had entered on St Joseph’s day) and was professed on 5 January 1937.  Her long life of loving service of God for sixty-five years in the congregation was spent mostly at Lochinvar, with a short period of time at Taree and Merewether. Her kind gracious, generous nature led her to request that her ministry be to her Sisters in the community through service mostly in the kitchen and laundry. At Lochinvar she would prepare, with assistance, two hundred meals every day for the Sisters, the girls in the boarding school and the residents of the Nursing Home.  She was also a skilful seamstress and very clever at crotchet.  She would sit with the sick and dying after long days in the kitchen or laundry and pray with them.

During the last few years her failing health saw her move into the Holy Family Wing at Lochinvar to be ministered to by others. Seven weeks before her death on 12 May, she was transferred to the Mercy Nursing Home at Singleton where she died peacefully on 28 June 2002.

The Funeral took place on 3 July and was attended by her relatives and friends along with a large number of Sisters. The Requiem Mass was celebrated by Father Desmond Harrigan and Monsignor Cotter and a priest from the Redemptorist Monastery at Mayfield. The Words of Remembrance were given by Sister Virginia Bourke RSJ and prayers at the graveside were led by Sister June Flynn, Congregation Leader. Sister Mary Conleth Desmond was laid to rest in the Sisters’ section of the Lochinvar cemetery.

Excerpts taken from the Words of Remembrance