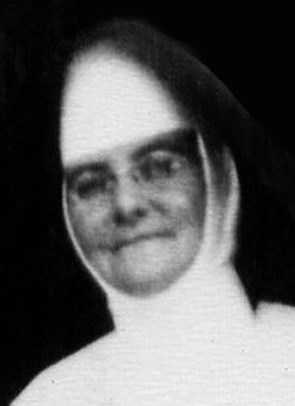 Emily Saunders Chapman was born on the 10th October 1887 to John Chapman and Margaret Saunders at West Maitland.

Emily was a dressmaker for some time before going to Lochinvar, entering the Novitiate on 2nd February, 1912 and taking the religious name of Sister Mary Dominica of the Holy Rosary. Her sister, Ellen also entered a year later in 1913 and took the name Sister Margaret Mary.

After Profession on 1st July, 1914 Sr Dominica was sent out to the Branch Houses as an Infants Teacher between 1936 and 1969. Sister spent some years at Dungog, West Wallsend, Abermain, Krambach, Lochinvar, Denman where she care lovingly for small girl boarders, Kurri Kurri and Shortland.

Sr Dominica was much loved for her gentleness and understanding in the classroom and in community living.

In 1970 Sister Mary Dominica retired to the Infirmary at Lochinvar where she enjoyed the occupational therapy classes. Sister and some of her Nursing Home companions were successful in the Regional and State Diversional Therapy competitions and competed in the finals.  At the age of ninety-four Sister Mary Dominica was one of winners in the competition.

Sister Mary Dominica died at Lochinvar on 11th January, 1984 and after a Requiem Mass in the Convent Chapel the funeral took place at the Sisters' section of the Lochinvar Cemetery.

Sister's niece, Sister Marguerite Chapman also a Sister of St Joseph spoke lovingly of her much-loved aunt at the time of her death.