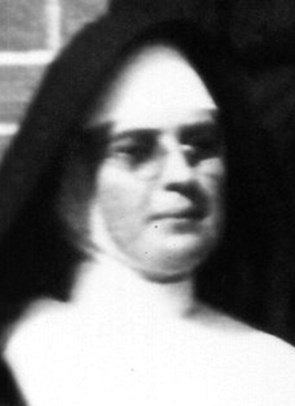 Sister Mary Elizabeth Hill, baptized Alma was born at Hurstville on 18 February, 1899, the elder of the daughters of Edmund Hill and Elizabeth Jones. Her parents came to live in Newcastle where they were known for their kindness to people in need. Many attributed their place in life to Mr Ted Hill's interest. Alma entered Lochinvar on 23 January 1918 and took the name of Sister Mary Elizabeth of the Blessed Sacrament. She was professed on 29 June 1920.

Miss Millie Hill, the only surviving member of the family was present both at the death of her sister, Sister Mary Elizabeth and at the Requiem. Sister Elizabeth died in St Joseph’s Rest Home after a long and distressing illness. Sister did valuable work for the Congregation particularly in the Secondary Schools at Lochinvar, Taree, Port Macquarie, Merewether, Wingham and Cessnock.

Possessed of a keen and cultured mind combined with a deep and practical faith exercised in the midst of such hidden suffering, she had a dynamic influence on her pupils, many of whom attended her Requiem. They included laity and religious. Sister Mary Elizabeth would have been proud that the celebrant of the Requiem Mass, Rev Fr Leo Donnelly and concelebrant, Rev Fr B. Kenny were her ex-students.

Besides having a wide knowledge of the classics, Sister Mary Elizabeth was a true educator in many subjects where she shared with her pupils a sympathetic, penetrating knowledge of life and people. Sister had a flair for Shakespearean drama and always tried to produce authentic costuming and for that purpose would send to the NSW Library for correct costumes to wear. She was a person who was unflinching where principles of truth were concerned, but also knew how to make and keep warm and real friendships.

Apart from being most cultured and versatile, Sister she was a garden-lover with a wide knowledge of roses. On the sports field she refereed the rugby and softball teams, both of which were forces to be reckoned with among the other schools teams.  Sister Mary Elizabeth's deep spirituality more than matched her other qualities as is evidenced by the influence she had on her pupils.

Sister Mary Elizabeth died on 10 May 1971 and was buried in the Sisters’ section of the Lochinvar cemetery.