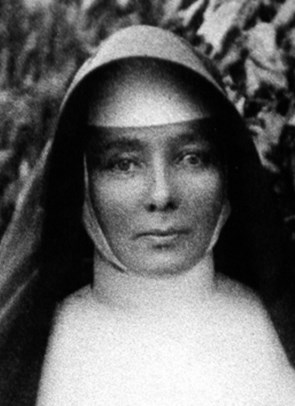 On the 13th June 1947, Feast of the Sacred Heart of Jesus, there passed to her eternal reward in her eighty-seventh year, one of the most notable personalities of the Congregation of the Sisters of St Joseph of Maitland and one of its best beloved members, Mother Mary Evangelist Hyde.

Elizabeth was born in Sydney in 1860 to James Hyde and Honorah O’Brien. In 1884, shortly after the Lochinvar Institute was founded from Perthville, the late Mother M. Evangelist with two other postulants entered its ranks.

The work of the young community was arduous in the extreme, but the difficulties were faced by valiant women and not the least valiant was the late Mother M. Evangelist. She was early appointed to the position of Novice Mistress and after a few years she became Sister Guardian. Her three alternate terms in that most responsible office were marked by the piety, justice and broad-mindedness that had always distinguished her.

A lover of prayer, the last few years of her life found her with her beads constantly in her hands. Until within a week of her death she attended daily Mass, read her Office and made the Way of the Cross, the latter often more than once a day.

Many telegrams and messages of sympathy from friends and past pupils to whom she showed a constant motherly care when in charge of the Institute, testified to the esteem in which she was held." Requiescat in Pace!