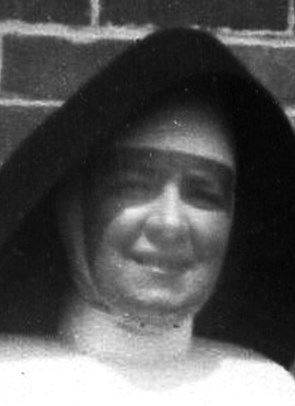 After completing her primary education in Newcastle she came to St Joseph's College at Lochinvar, where she completed her secondary education with much distinction.

On 24 May 1928 she entered the Novitiate at Lochinvar and received the religious name Sr Mary Felicitas of Our Lady Help of Christians.

After profession on 1 July 1931, Sister Felicitas taught at Dungog, Taree, Wingham, Port Macquarie and Cardiff where she endeared herself to all her pupils. A fine scholar and gifted with high musical and artistic ability, she did brilliant work in the schools until she fell a victim to incurable ill-health, tuberculosis which took her from her Congregation, her family and friends to their great loss.

Sister Felicitas made many friends, both within the church and out. All learnt with sadness of her passing. It was at Cardiff that she became ill. During her seven long years of illness, she was most courageous and presented a bright happy disposition to those about her.

Her death, like the years of her sickness, was "a shining example of faith, hope, love, resignation and fortitude." It occurred at St Joseph's Convent in Lochinvar on Sunday, 15th February 1953, in her forty-fourth  year.

Her parents, Mr and Mrs Pat Fallins, her own two sisters, Mary Justin and Gemma, her two brothers, Vince and Darcy and many relatives and friends attended her funeral Mass on Thursday 19 February.

The Rt. Rev. Mons Peters V.G., P.P., P.A presided at Requiem Mass and preached the  panegyric.  Very Rev. H. Ward (Lochinvar) was M.C. and Rev. T. Cicollini, the celebrant was a past pupil of Sister M Felicitas. A tribute to her and to her family was the presence at the obsequies, in spite of the weather, of fifty priests, some of whom had travelled long distances by car to be present. Rain which had threatened since early morning, fell in torrents as the hearse moved from the convent to Sisters’ cemetery; notwithstanding which a large number of those present accompanied the remains to their last resting place.