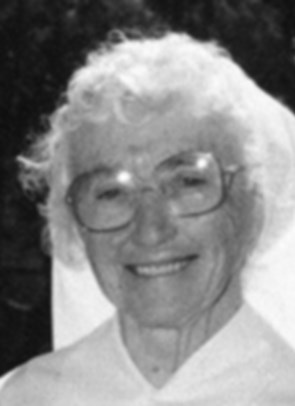 Mary Alma Balton was born in Wingham on 28 September, 1911.   Her parents were Michael and Josephine Balton. Michael was a dairy farmer who originated from Ireland.  Mary was a student at St Joseph’s Boarding School at Lochinvar from 1925 to 1929.  She left the family farm at Wherrol Flat near Wingham to enter the Novitiate at Lochinvar on 8 September, 1930 where she was given the name of Sister Mary Francesca. She was professed as a Sister of St Joseph with Sisters Mildred Casey and Finbarr Collins on 5 July 1933.

An enthusiastic and creative primary school teacher, Sister Mary Francesca served in many schools throughout the Diocese of Maitland-Newcastle: Kurri Kurri, Lochinvar, Merriwa, Abermain, Carrington, Dungog, Aberdeen, Cessnock, Merewether, Forster, Belmont, Windale, Bulahdelah, Morisset and Krambach.  In 1959 she was a founding member of the Tuncurry/Forster community.  While the Sisters lived in Tuncurry, the school was in Forster which meant the Sisters travelled by boat to and from school each day. During the 1950s she cared for Boarders at Lochinvar and during 1960s she was Supervisor of Primary Schools for both the Congregation and the Catholic Education Office.

In 1989 Frannie, as she was affectionately known, retired to the Nursing Home at Lochinvar. When it closed in 2001 she was transferred to the Mercy Nursing Home in Singleton where she was lovingly cared for during the last six years of her life until her death there on 19 August 2007.

Her Funeral Mass took place in the Convent Chapel at Lochinvar on 23 August.  She was almost ninety-six years of age and was in the seventy-fifth year of her religious profession.  She was laid to rest in the Sisters’ section of the Lochinvar cemetery.

Taken from the Words of Remembrance delivered at her Funeral Mass