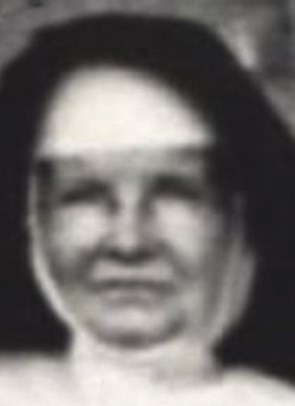 Annie Hawley was born at Ultimo in Sydney on 21st September, 1876, the daughter of Michael and Catherine Hawley. Sorrow came to her very early in life when her mother died while she was still quite small. Much grief was felt for the father and daughter. It was then that Annie came to live in Lochinvar. She entered the Novitiate at Lochinvar at the age of nineteen and offered herself to God's Service. She was received on 15th August, 1895, was given the name of Sister Mary Gabriel and was professed on 6th July, 1898, thus joining the pioneering Sisters who laid the foundations of the Lochinvar Congregation.

She laboured in many houses throughout her long and useful life - in Aberdeen, Taree, Wauchope, West Wallsend, Swansea and Lochinvar.  She never lost her first fervour.  Indeed her life was an example, for generously did she give her best. She was a happy soul because she sought first the Kingdom of God.

The above are excerpts taken from the panegyric given by His Lordship, Most Reverend John Toohey

In the early hours of 30th June 1962, the soul of Sister Mary Gabriel (Hawley) passed to its eternal reward.  She was in her eighty-sixth year. Sister had been ill for only a short period and her death was as gentle as her life.

The Solemn Office and Requiem Mass took place in St Joseph's Convent Chapel, Lochinvar on 2nd July. His Lordship, Most Reverend John Toohey, D.D., presided and officiated at the graveside. A choir of forty priests chanted the Office of the Dead. The celebrant of the Mass was Father Coffey with Fathers Sylvester and McGannon, C.S.S.R. deacon and sub-deacon respectively. Father B. McCosker was Master of Ceremonies and the cantors were Fathers Hanrahan, Heffernan, Ross and Hornery.  The interment took place immediately after the Mass, in the Lochinvar cemetery. The Bishop and the Clergy led the cortege and the Sisters, students and friends followed. Pall Bearers were Messrs. Burgess, Shanahan, Killan and McFadgen.