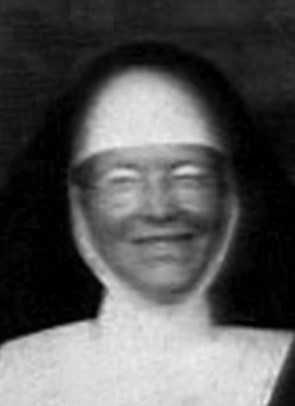 On Sunday, 6 December 1954, the Sisters of St Joseph of Lochinvar lost by death one of their most revered members in the person of Sister Mary Gerard.

Sister seemed in her usual health though never very robust, and on Saturday night, she spent her recreation with the Sisters occupying herself in preparing the College Magazine for dispatch. On Sunday morning, she rose as usual for Mass and while waiting in the Chapel, had a heart seizure. During the day she had another turn and the priest was summoned and anointed her as her Sisters in Religion knelt around her, reciting the prayers for the dying. Sister passed away as quietly as she had lived, but her death robbed the Congregation of one of its most accomplished members.

Sister Mary Gerard spent a few of her fifty religious years teaching in various schools of the diocese: in Glendonbrook, Dungog and Aberdeen.  However, for the greater part of her life she was engaged in secondary school work, especially in Art and the Languages at Lochinvar. She was gifted poetess and artist and was happy always to use these talents in the interests of her Congregation.

Sister Mary Gerard has been remembered especially for her work in editing the College Magazine which has brought much pleasure to ex-students of the College. This laborious task Sister carried on for thirty-one years and she had just received the completed copies for 1954 on the day preceding her death. To Sister this work was a pleasure, for she felt that by it, she was knitting a bond between Lochinvar and the ex-Students, each of whose careers she followed with interest and enthusiasm.

The second daughter of the late Patrick Long and Agnes Butler, Sister Mary Gerard was born at Hillsborough near Maitland on the 6 May, 1874. She received a first class education and entered St. Joseph's Novitiate on the 8 December 1904. Of the nine children of the Long family, three survived her: Amy (Sydney), Patrick (Sydney), James (Maitland) whose only daughter, Ruth entered the community at Lochinvar.

The Solemn Requiem and Office was celebrated at 10.30 on Tuesday, 7 December, His Lordship, Most Reverend E. Gleeson presiding in the sanctuary. A choir of thirty-two priests attended, including the Right Rev. Monsignor Peters V.G., P.A., who also officiated at the graveside. Celebrant of the Mass was the Rev. J. Lavery with the Revs. P. Purcell and H. Campbell deacon and subdeacon respectively. Rev. J. Delaney was Master of Ceremonies. Cantors were the Revs. N. Whithnell and J. Hughes.

In a touching panegyric His Lordship referred to Sister M. Gerard's great work for the Congregation and to her humility which was even more marked than her talents.

A large gathering of the relatives and friends of Sister M. Gerard were present at her obsequies, also many Lochinvar parishioners. Pall-bearers were Messrs J and R Long, A. Leehy, E. Davoren.