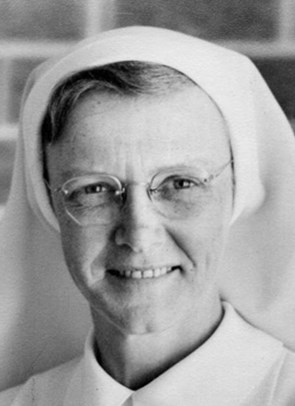 Joan Fallins was born at Kearsley on 10 June 1923.  Her  death marked the end of a nuclear family which could be said to be both typical and atypical: typical in that, through her Dad, James Fallins it contributed significantly to the mining industry in our general locality and atypical in that all the children of James and Lilla (née Single) were prepared to give their lives to God and the service of the Church. To look at Joan's life therefore is to have a window into an earlier generation's sense of faith and Church and what it counted as of lasting value.

Joan entered the Novitiate at Lochinvar on New Year’s Day 1941, joining her eldest sister Nellie (Sr M Athanasius) who had entered in 1929.  Her other two sisters, Joyce and Pen became Srs Madeleine and Vianney as Daughters of the Sacred Heart.  Joan was professed as Sr. M. Hyacinth of the Joys and Sorrows of St Joseph on 6 July 1943 with Sisters Regina McMahon, Mary Catherine Jensen, Margaret Connell, Eucharia Jackson and Loretta Mullins.

She was an enthusiast about life and about all that the world offers in natural beauty, music, family and friends. She loved tripping around, travelling up country roads just to see the beautiful things that could be seen and as one Sister recalled of their time together in Krambach: "The stars at night were her delight. Many a night she would be out in the backyard at midnight (or earlier or later) admiring the heavens".

Hyacinth was a people's person. It was characteristic of her to keep in touch, to remember birthdays, to pay visits.  Far from being awkward about socialising with people, she was a natural at it. She had no sense of being above other people and in fact she took a dim view of anyone who did.

Another Sister recalled, “On one occasion when we took in a very needy lady on a freezing cold night, Hy prepared soup and toast for her while she warmed herself at our heater. We made up a bed for her and after a hot shower she settled in a warm bed. We arranged petrol money for her in the morning. About a week later we received from this lady's parents a note expressing gratitude plus money”.

Hyacinth had a great compassion for the elderly and sick. She thought nothing of spending a whole day with some sick people. On the farms she was full of fun and showed enthusiasm at the arrival of new calves or a new litter of pups. She was ready and willing to visit those so far out of town and she formed great friendships with many of these people. She respected them and their stories.

A treasured part of her latter years in Krambach was the weekly visit to Wingham Court, the Masonic Aged Care Home. There people remarked upon her interest and time freely offered to all and sundry, patients and staff alike. When reminiscing, Sister Hyacinth seemed to measure her life and its value by comparison with others and she judged herself as small.

In 1978 Hyacinth retired to Tenison Apartments in Swansea.  Early in October 1998, after spending a day with relatives and friends of the Swansea community in their rose garden, she suffered a brain stem stroke and was taken to Belmont Hospital where she died a few days later, on Sunday evening 4 October.   She was buried on 8 October in the Sisters’ Cemetery at Lochinvar.

Based on  Words of Remembrance by Virginia Bourke rsj