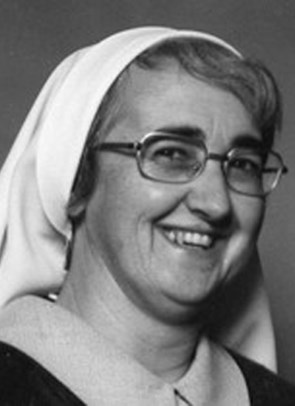 Clare Cecelia Caesar, born on 12 March, 1934 in Hamilton was the youngest child of Cuthbert Caesar and Ellen Mary Lynch and a sister to Marie, Rita, Joseph and Mark.  She entered the convent at Lochinvar on the feast of St. Joseph, 19 March 1951, became Sister Mary Jacinta of St. Joseph, and was professed on 5 January, 1954 with Srs Genevieve Henderson, Rosalie Jurd and Patricia Swaddling.

Jacinta began teaching (Year 4) in Aberdeen in 1955, moved to Merewether and secondary teaching in 1957 and then to Taree in 1962. She returned to Merewether in 1968, having already begun a Bachelor of Science degree by Distance Education, which she completed, as a part-time student, at Newcastle University in 1972, and moved again to Taree, as Principal from 1973 — 1984.

In 1985, Jacinta had a sabbatical year and spent the time in renewal at the Spirituality Centre in Randwick. She was appointed Congregational Bursar in 1986 and was elected to the Congregation Council from 1987- 1992. Jacinta moved to Kilaben Bay in 1993 and continued ministry at St. Paul’s High School, Booragul, teaching, assisting and companioning school leaders, staff and students and ministry in the Toronto parish, until a few weeks before her death.

While not using the language of love much, Jacinta simply lived it, made love visible in her actions, in the way she related, in the myriad little ways she was always there to answer a need - be it for a listening ear, a word of sound common-sensed advice, a quietly strong presence when you were in distress, a gentle and at times, not so gentle warning when it seemed to her you were stepping over the boundary, getting out of line or being unreasonable. Many found a place in Jacinta’s big, generous heart — from her own dear family, her Josephite Sisters, her friends and colleagues at St. Paul’s, St. Clare’s and other schools, in the parish in her RCIA groups and choir, in the Cancer Support group, her great friends from her 1985 Renewal year and probably many, more people whose paths crossed hers.

Jacinta was a no-nonsense woman. She had definite views on a wide range of matters and engaged in lively, energetic discussions and debates on political ideologies, sports, religious life, community life, ethics and morals, appropriate behaviour as she saw it, education and educational decisions.  She was intolerant of foolishness, small-mindedness and anything that would intentionally do violence to another.  You could trust her with the most personal of confidences and know they would remain with her — in her heart and mind and prayer — and never become common parlance. She had no sophisticated airs and graces, no need to hug the limelight, no time for empty pretence or phoniness. She was always, authentically who she was.

Jacinta was an inspired and inspiring teacher, hard working and incredibly diligent! The things of Science were her great love, as generations of students and colleague teachers will attest and her own enthusiasm and curiosity for her subject caught on in her students. She was thorough and demanding and her expectations were high. In her dealings with young people and with adults too, she was scrupulously fair and just - a trait that people found endearing. This fairness appealed especially to adolescent boys who related very positively with Jacinta, whether in the classroom, in the yard or on the Rugby field.

Jacinta was a woman of prayer. She loved the daily prayer of the Church, celebrated Eucharist daily; was faithful to regular meditation and spiritual reading, the traditional foundations of Religious Life and she knew well the natural prayer of being aware and conscious of the presence of God in the everyday, at every moment.

As her health deteriorated over the last few years she was determined to remain the active , cheerful Jacinta. She dealt with her lot evenly, positively, firmly, matter-of factly. She struggled with it and, in the end, entrusted her deepest thoughts and fears, her very life, in great hope, to a totally loving God.  God called Jacinta home on October 17, at 8.20am.

Excerpts from Words of Remembrance by Lauretta Baker rsj.