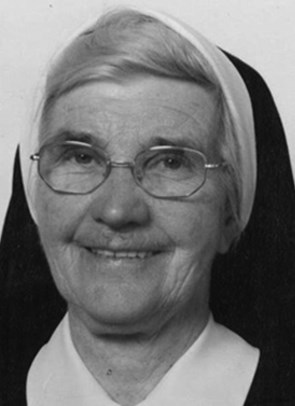 Anne Mary Crittenden was born on 26 May, 1907 in The Lansdowne, an area on the mid-north coast near Taree and the gateway to the Manning River Valley's northern hinterland.

Anne was the fourth of the seven children of George Crittenden and Anne Unger.  Both her parents came from pioneering families in the area, George being a grazier.  Anne grew up in a loving family that nurtured her faith and where social gatherings for tennis and dances brought the community together. Anne’s early education was at the Lansdowne Public School and Taree High before going away to the Boarding School in Lochinvar.

The family moved to live in Taree where the young Miss Crittenden found employment with a firm of Auditors and Accountants.  She mastered the intricacies of business principles, the subject she would teach in the ensuing years.

On  1 January 1937, at the age of thirty, Anne entered the Novitiate at Lochinvar and was given the name of Sr Mary Joachim. Her Profession, as a Sister of St Joseph followed on 29 June, 1939.  She then began her years of dedicated teaching at Port Macquarie, Dungog, Lochinvar, Swansea, Windale, Kendall, Krambach, Tuncurry and Bulahdelah, sometimes returning twice over, until 1979.

Sr Mary Joachim’s appointment to Lochinvar from 1943 to 1961 included sixteen years as the Sports Mistress where she put her energy into organising sport days, physical education displays and marching and nine years as Boarder Mistress from 1952-1961.

When her teaching days were over Sr Mary Joachim continued to visit people in their homes in Swansea and Bulahdelah before open heart surgery in 1984 restricted her activities.  After some years at Shortland and Swansea, she finally came home to Lochinvar in 1991.

While living in the Nursing Home Sr Mary Joachim retained a keen interest in what was going on around her, especially in the sporting world and in lives of her extended family.

Sr Mary Joachim died peacefully in Lochinvar on 11 November, 1997 at the grand age of ninety. After Mass in the convent chapel she was laid to rest in the Sisters’ section of the Lochinvar cemetery.