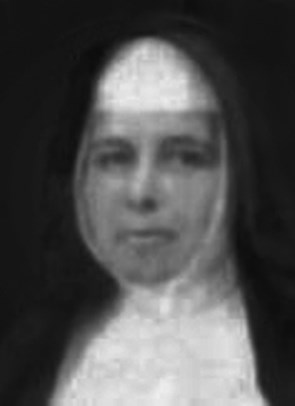 Juliana Dowling was born in Hobart on 15 May 1853 to William Paul Dowling, Irish artist and photographer, and Julia Anne nee de Veaux. Her father was a political prisoner transported in 1848. Her mother emigrated from Ireland, following her fiancée to Hobart. They knew Julian Woods there in 1855. Mr Dowling’s religious paintings remain in St Joseph’s church, Hobart.

Juliana’s mother died when Juliana was sixteen, leaving her and a brother as the remaining children. When Father Woods missioned in Tasmania from 1874-1876, friendship was renewed with the family, then in Launceston. In 1877 when Juliana was twenty-four, Mr Dowling died from tetanus following surgery. There is an oral tradition that he left Juliana in the care of Father Woods. (See Ed. Margaret Glover and Alf MacLochlainn, Letters of an Irish Patriot: William Paul Dowling in Tasmania, 2005.)

Juliana entered the Sisters of St Joseph at Perthville, Bathurst in 1880 taking the name of Sr Mary John, and was professed in 1881. She left Perthville in 1885 and later joined the group of pious women who cared for Father Woods in Surry Hills till his death in 1889. She was Father Woods’ amanuensis.

Sr Mary John returned to Tasmania and in February 1892 re-entered the religious life with the Sisters of St. Joseph at Westbury and made her perpetual vows on the 1st April, 1893.

In October, 1900 Sr Mary John led the small group of Sisters who left Tasmania to make a foundation at Creswick in the Ballarat Diocese of Victoria. A second convent was eventually opened at Dunolly and the Sisters worked in the Diocese till 1914.

Sister M. John had suffered a stroke some time before this and as the Sisters were unable of maintaining the apostolate in the area, Sister Mary John and six companions left Creswick with the approval of Bishop Higgins, Bishop of Ballarat and joined the Lochinvar Congregation on 22 December 1914.  Mother M Evangelist was the Sister Guardian who received them. (see Marie Crowley, Except In Obedience, The Diocesan Sisters of St Joseph in Victoria, 2012)

Sr Mary John stayed in Lochinvar in 1915 where she sometimes went to the music rooms to listen to the music pupils play their exam pieces. However her speech had been affected by the stroke and communication was difficult.  She then spent two years, from 1916 teaching music in Cundletown before being appointed, again as music teacher, to West Wallsend in 1919.

Sister M. John had been rigorous and vigilant in training her Sisters when she was the Novice Mistress at Creswick and had passed on to them a love and respect for all facets of religious life, a deep confidence in the providence of God and a great devotion to Father Woods.

On 27 January, 1922 Sr Mary John Dowling died in the Infirmary at Lochinvar. Thus this Tasmanian-born woman who frequently moved between congregations in a most unconventional religious life, came to rest in the Lochinvar cemetery after Office and Requiem in the convent chapel on the 28 January, 1922.