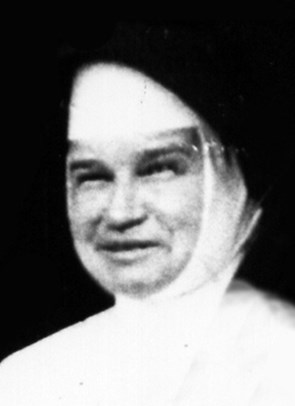 Frances Anne Gallagher was born on 1 January, 1871 to William and Brigid Gallagher (née Tuite), who were hotel keepers in Merriwa. Frances' birth name was registered as "Fanny A. Gallagher". She was the third of nine children. Two brothers died young and seven girls survived.

Frances was the first of the Merriwa girls who became Sisters of St. Joseph at Lochinvar. She became a postulant on 9 July, 1889 taking the name Sister Mary Josephine of the Prodigies of Mary and received the habit in the Oratory on 29 January, 1890. During her Novitiate she was located at Carrington and Burwood. After First Profession with Sister Mary Agatha on 28 December, 1891 she returned to Carrington for the next two years.

Sr Mary Josephine was to work, sometimes as the superior, in many branch convents and schools, where she taught primary classes. Included in her places of ministry were Burwood, Carrington, Krambach, Brookfield, Cessnock, Wingen, Largs, Aberdeen and Gloucester. She spent much of her life in Brookfield and Carrington and in the latter years at Aberdeen as well as the years she spent at Lochinvar after having been appointed Bursar in June 1908 until June 1911.

It was in Aberdeen, where she was superior, that Sr. M. Josephine took ill with septic tonsillitis in April, 1930. Her illness, coupled with a heart condition proved fatal and she died on 22 April, 1930. Sr. M. de Pazzi had gone to Aberdeen to nurse her a few days before her death. It was written of her at the time of her death: "Sister M. Josephine who made Aberdeen the fine boarding school for small boys, which it is at the present time, died there at her post."

A 1930 newspaper obituary for Sr Mary Josephine Gallagher noted "Sixteen years of her religious work were spent in Aberdeen, where she practically founded and built up the present St. Joseph's Boys' College at Aberdeen which cares for and educates about forty boarders, all under the age of 12 years. This, in addition to the care and education of the local Catholic children, carried a big responsibility. In the capacity as mother and manager of the Convent, the late Sister Mary Josephine was a wonderful and beloved administrator who will be greatly missed and her place will be very hard to fill."

Her body was brought to Lochinvar early on the 23 April and Office for the Dead and Requiem Mass were celebrated at 10.00am in the Convent Chapel. Mgr. Roche V.G. presided and thirty-four priests attended as well as many Sisters from the branch houses. The funeral to the Lochinvar Catholic Cemetery took place after Mass and at the grave side a beautiful harmonised rendering of the “Ego Sum” was given.